All eight teams to compete across Pride Round 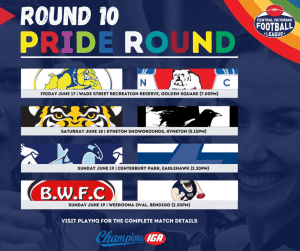 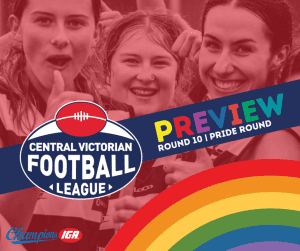 ALL of the Champions IGA-backed CVFL senior women’s football teams will feature in this weekend’s Pride Round action.

Each team will be wearing Pride Socks, in a celebration of diversity and inclusivity within the game and community.

Nathan Williams (AFLCV Female Operations Manager) said “AFL Central Victoria is proud to support Pride Round. Providing each club with Pride Socks recognises the importance the region places on every person feeling included and welcomed in the Central Victorian football environment. We are thankful our clubs are so welcoming to all female players wishing to join the football community.”

When these clubs last met in round two on April 9, Golden Square scored a 175-1 victory on North Bendigo’s turf at Hibo Hotel Oval in Atkins Street.

It’s been a tough run for the Ricky Crotty-coached North Bendigo which has had the bye the past two rounds after a 64-1 loss at home to Strathfieldsaye in the Indigenous Round match on May 29.

The team in red, white and blue will also look to Teagan Stuchbery, Leonie Schulz and Kayla-Brea McIntosh to lead the way.

A highlight of Pride Round will be the Kyneton and Castlemaine match on Saturday at Kyneton Showgrounds.

The night-time showdown between the Tigers and Magpies starts at 5.15pm.

In round two, Castlemaine marked a 79-16 win against the Tigers at Camp Reserve.

The Phil Hawkes-coached Tigers have moved to the third rung on the ladder.

Before last weekend’s bye, Kyneton had beaten Bendigo Thunder by 17 points at Tigerland, and won 42-35 on Eaglehawk’s turf at Canterbury Park.

Castlemaine dominated the second half of last Sunday’s match against Bendigo Thunder at Weeroona Oval to win by 43 points.

The Tiahna Cochrane-coached Magpies were down 15-25 at half-time, but then added 7.11 to nil in the second half.

Shelby Knoll kicked five goals for a season tally of 36 to lead the league’s goalkicking race.

On Sunday, Eaglehawk is back at Canterbury Park to take on Strathfieldsaye.

The Hawks and Storm clash starts at 2.30pm.

The round two match between these teams ended in a 113-7 win for the Hawks on Storm’s turf.

Victory is a must for Eaglehawk to stay in touch with the fourth-placed Bendigo Thunder.

Best for the Two Blues against the Kerang Blues were Courtney Smith, Kelly Mensforth, Freyja Pearce and Molly Metcalf.

Others to watch include Jasmine Burzacott, Anya Cardilini, Lucy Dawe, and Olivia Murley.

Storm worked hard to be within three goals of Golden Square at half-time of last Friday’s match.

In the second half, Square added 3.9 to a point.

The play of Lila Keck, Britt Tangey, Keisha Tonzing and Lana Westaway will be a key to Storm’s chances.

Bendigo Thunder is back at Weeroona Oval to take on Kerang from 2.30pm on Sunday.

In round two, Thunder 104-nil at Kerang’s Riverside Park.

Thunder and the Blues are both on the rebound from defeat.