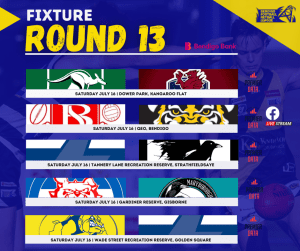 It’s fifth against fourth as the Bloods and Tigers do battle at Queen Elizabeth Oval in Bendigo.

South Bendigo scored a nine-point victory at the ground against Sandhurst last Saturday to hold its place in the five.

The Nathan Horbury-coached Bloods are a win clear of the sixth-placed Eaglehawk and two wins ahead of the seventh-placed Sandhurst.

When South Bendigo and Kyneton met in round four it was the Bloods who scored a three-point victory at Tigerland.

Unavailable last round because of Covid protocols, Horbury is back in charge and was named as ruck-rover.

The Bloods are also strengthened by the return of last season’s club champion Cooper Leon in midfield.

Key players for the Bloods include Brock Harvey and Kaiden Antonowicz who combined to kick eight goals in the win against Sandhurst.

There will be important roles for Cameron Taggert and Sam Langley in defence.

The Paul Chapman-coached Kyneton is on the rebound from a 17-point loss at home to Strathfieldsaye.

After a 1-3 start the Tigers won their next six.

Kyneton has faced Gisborne and Strathfieldsaye the past two rounds.

Rhys Magin has reached the 50-goal mark for the yellow and black and will be a threat to the Bloods all match.

The play of onballers Dean Bartrop and Hamish Yunghanns was a highlight of the Tigers’ winning streak.

Another big match will be at Fur Life Oval in Golden Square’s Wade Street where the Bulldogs take on Eaglehawk.

An upset win by the Hawks and a Tigers victory at the QEO would put the Borough back in the five.

It’s a daunting task for the Travis Matheson-coached Eaglehawk.

Golden Square’s attacking power was to the fore in its past two hit-outs against Kangaroo Flat and Maryborough.

Gun forward Joel Brett has gained a sizeable lead in the race for the Ron Best Medal.

Not only is Brett kicking plenty of goals, but also racking up goal assists.

A powerful attack includes the marking power of Jayden Burke, Tom Strauch and Braydon Vaz, and the skill of Jarrod Fitzpatrick and Ricky Monti.

A key to the Bulldogs’ run is through midfield where Ryan Hartley, Hamish Morcom and Jake Thrum win plenty of the ball and also apply a lot of pressure.

Eaglehawk slammed on 10.6 to 1.4 in the second half of its win against Kangaroo Flat at Canterbury Park.

The Hawks will look to Liam Marciano, Darcy Richards, Ben Thompson and Sean Williams to lead the attack, and for captain Shaun Knott, Lewin Davis, Dylan Hanley and Clayton Holmes to be strong in defence.

Kangaroo Flat takes on Sandhurst at the Roos’ ground in Dower Park.

It’s a must-win game for Sandhurst to stay in touch with the top five.

The James Flaherty-coached Kangaroos worked hard to be within 15 points of Eaglehawk at half-time last Saturday.

Jack Barras did well to kick a team-high three goals.

The Roos will be determined to create and finish more scoring opportunities in this contest.

Players to watch for Kangaroo Flat include ruckman/forward Nick Lang, Campbell Smith in the centre, Sam Barnes, Jake Hywood and Bryce Franzini in defence, and Ethan Roberts on a wing.

Key targets in attack are Max Johnson and Lachy Wilson as Mitch Rovers takes on the club he played for last season.

Sandhurst has plenty of run and skill in the onball and midfield areas.

Hamish Hosking has played well in the ruck all season as Cobi Maxted and Joel Wharton have been the Dragons’ leading goalkickers.

The Dragons have the experience of Blair Holmes, Jake McLean and Brodie Montague to lead a young squad that includes Tanner Nally, Connor Sexton and Jasper Stewart.

Strathfieldsaye is on home turf at Triple M Park in Tannery Lane to take on Castlemaine.

Storm won at Kyneton by 17 points as James Schischka and Lachlan Sharp teamed up again to lead the attack on three goals apiece.

The Darryl Wilson and Shannon Geary-coached Storm has plenty of options to run through the onball and midfield.

It’s another massive test for the young Castlemaine line-up coached by Don Moran.

The Magpies will be without Bailey Henderson, a premiership winning player for Storm, who has returned to Castlemaine this season.

Those who will play crucial roles for ‘Maine include Riley Pedretti at centre half-back, Zac Denahy at full-forward, Jackson Hood and Kaleb McBride in defence, Liam Wilkinson, and ruckman Sam Nettleton.

Gisborne and Maryborough clash in the Bulldogs’ kennel at Gardiner Reserve.

The Rob Waters-coached Gisborne welcomes back prolific ball-winner Brad Bernacki in the centre and captain and key forward Pat McKenna.

Harry Thomas kicked seven goals in the win at Castlemaine and is part of a Bulldogs’ attack that includes Dan Davie, Matt Merrett and Ethan Minns.

In-form players for Gisborne include onballers Seb Bell-Bartels and Flynn Lakey, and Macklan Lord on a wing.

Maryborough coach Rick Andrews marked a comeback to an on-field role earlier  in the season and was named at full-forward for the clash on Gisborne’s ground.

Full-back Kya Lanfranchi competes well in all contests, while the Magpies will look to Chris Freeman, Coby Perry, Jake Postle and Patrick Van der Pol to apply plenty of pressure.

Leaders in the race for the Ron Best Medal goalkicking award: