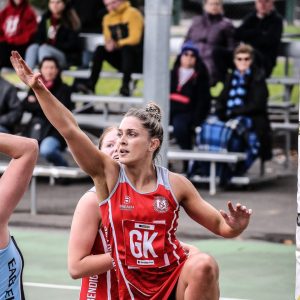 Bloods aim to bounce back against Gisborne

SOUTH Bendigo will aim to bounce back from defeat when it takes on Gisborne in this Saturday’s 15th round of A-grade netball in the Bendigo Bank Bendigo Football Netball League.

It’s fifth against third as the Bloods and Bulldogs meet at Queen Elizabeth Oval.

When these teams met in round six it was Gisborne which scored a 55-36 victory on the Gardiner Reserve court as Rylee Connell and Claudia Mawson were best for the red, white and blue.

The Jannelle Hobbs-coached South Bendigo will be keen to put in a strong performance after last week’s 45-27 loss on Castlemaine’s court at Camp Reserve.

Another big match will be at Kangaroo Flat’s Dower Park where the ladder-leading Roos take on Castlemaine.

The Jayden Cowling-coached Kangaroos jumped to top spot after a big win against Sandhurst in the 13th round.

It was the Roos who made a flying start to lead by eight goals on the way to a 57-41 victory.

Goalshooter Lou Dupuy was in hot form and will test the Magpies’ defence once again.

Key players for the Flat include Abbey Ryan and Milly Wicks.

Maryborough will chase consecutive wins when the Magpies are at home at Princes Park against Strathfieldsaye.

The Alicia Cassidy-coached Maryborough scored a 51-50 victory in last Saturday’s match against Eaglehawk at Canterbury Park.

The Magpies were stung by a seven-goal turnaround in the final quarter of their round six match on Storm’s court at Triple M Park in Strathfieldsaye’s Tannery Lane.

Maryborough led by four goals at the start of the final term, but Storm led 48-45 at the final whistle.

It was a tough afternoon for Strathfieldsaye at Gisborne last Saturday as the home team won by 47 goals.

A win at Prince Park would mark a jump of one place on the ladder for Strathfieldsaye.

Eaglehawk is at home at Canterbury Park to face Sandhurst.

The Tamara Gilchrist-coached Sandhurst has a powerful goaling line-up that includes Bec Smith who earned the Pat Cronin Foundation Medal when the maroon and blue beat Eaglehawk in the sixth round.

The Hawks’ attack will be up against talented defenders Imogen Sexton and Sophie Shoebridge.

In round six, Golden Square scored 40 goals, but it was the Tigers who hit the 54-goal mark.