Bloods fight to win by goal on home court against Colbinabbin 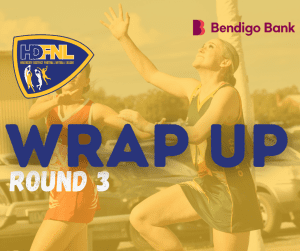 Unbeaten in the shortened 2021 season, Elmore started this campaign with wins against Colbo in the season opener on April 2 and then at home against Mount Pleasant and at North Bendigo.

The Bloods and Colbo met for the second time in four weeks.

Round one ended in a 14-goal win for Elmore on Colbo’s court at M.J. Morgan Reserve.

This time the Grasshoppers applied plenty of pressure in all thirds of the court.

Goalshooter and Bloods’ co-coach Gabe Richards played a crucial role, especially in the final quarter to clinch a one-goal win.

Elmore, which is also coached by Allira Holmes has the bye this Saturday ahead of the May 7 clash on the White Hills court in Scott Street.

It will be another big test for the Bloods as White Hills showed it has plenty of scoring power and skill against North Bendigo.

The Lauren Bowles-coached Demons made a hot start to the contest and did not let up on their way to a 72-25 victory at home against the red, white and blue.

White Hills travels to Colbinabbin for the fourth round showdown at M.J. Morgan Reserve.

A memorable round of netball included a long-awaited victory for Lockington Bamawm United and a triumph for Mount Pleasant.

The Anzac medal, as determined by the umpires, was awarded to Hardess.

Mount Pleasant took the points against Heathcote in what was a first victory for Carine Comer as coach of the Blues’ A-grade team.

In this Saturday’s fourth round, Colbinabbin faces White Hills, and Mount Pleasant takes on Leitchville Gunbower at Toolleen.

Lockington Bamawm United will chase consecutive victories when the Cats play the Hawks from Huntly on Lockington’s court.

The North Bendigo and Heathcote match was played as a season-opener on April 2 and won by the Saints on the Bulldogs’ court at Hibo Hotel Oval in Atkins Street.