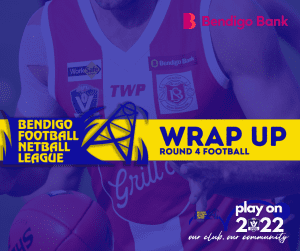 SOUTH Bendigo fought from a 13-point deficit at the start of the final term to win by three points at Kyneton in round four of the Bendigo Bank Bendigo Football Netball League’s senior footy season on Saturday.

There was plenty at stake between two teams who are likely to be fighting to occupy the fourth and fifth rungs and a place in the finals series.

The Nathan Horbury-coached South Bendigo led 26-18 at quarter-time, but the Tigers fought back to make it 47-all by the long break.

The Bloods lifted their intensity and workrate at stoppages and through the midfield in the last to score 3.5 to 1.1 as they surged to a 90-87 victory.

It was a superb effort by Alexander Smith and the in-form Brock Harvey to kick three goals apiece in a contest where gun forward Kaiden Antonowicz was goalless.

Kyneton’s Rhys Magin added to his impressive run in attack with a match-high five goals as Ryan Pretty added four.

After a hard-fought first half, Golden Square charged clear in the second to score a 47-point win at Eaglehawk’s Canterbury Park.

A red-hot Golden Square was under the pump for a lot of the opening hour as it led 25-17 at half-time.

It was a superb effort by the Travis Matheson-coached Eaglehawk which went into the match without key forward Darcy Richards and ruckman/key position player Clayton Holmes.

Leading goalkickers for the Hawks were Liam Marciano and Corey Roberts, two each.

Sandhurst marked its first victory of the season in a 131-59 result against Kangaroo Flat at Queen Elizabeth Oval.

The Dragons won three quarters and tied the other.

Cobi Maxted and Matt Thornton’s marking power was to the fore as they finished with six and five goals respectively as Jake McLean and Alex Wharton added two each.

Strathfieldsaye Storm dominated most of the contest with Castlemaine at Camp Reserve.

The Don Moran-coached Magpies lifted their play in the third term to score 1.4 as Storm added 3.7.

Storm on-baller Jake Moorhead won plenty of the ball as did Kallen Geary, Thomas Bennett and Riley Clarke as Strathfieldsaye slammed on 5.2 to just two behinds in the final term.

A tally of eight goals put Storm star Lachlan Sharp in second place for the Ron Best Medal as the league’s leading goalkicker.

After a goalless performance at Gisborne the previous round, Castlemaine struck back to score 2.7 as Bradley Keogh and Liam Wilkinson were on target.

Gisborne passed the 150-point mark once again in a big win on Maryborough’s turf at Princes Park.

Despite going into the match without captain and gun forward Pat McKenna, Gisborne showed it has plenty of attacking power.

Led by a seven-goal haul by Josh Kemp and five majors from Jack Scanlon, Gisborne kicked on to win the clash, 158-17.

Highlight of next Saturday’s fifth round will be the showdown between Golden Square and Sandhurst for the Ron Best Memorial Shield on the Bulldogs’ turf at Fur Life Oval in Wade Street.

Maryborough and Eaglehawk meet in the battle of the boroughs at Princes Park.