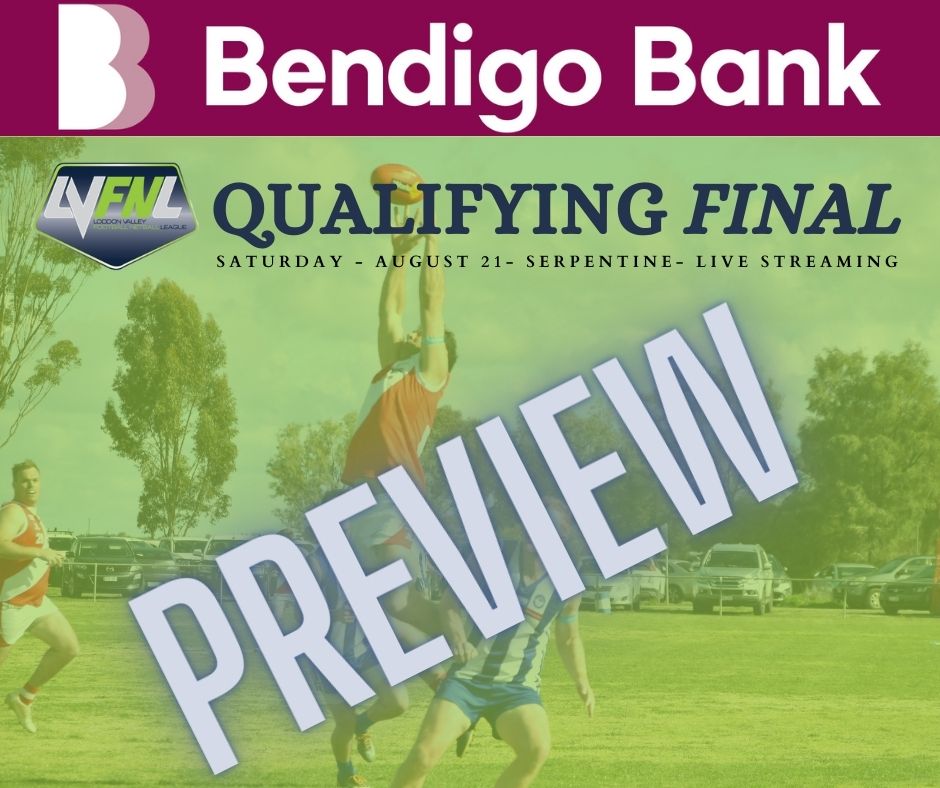 The start of the weekend’s finals action also marks Bendigo Bank Round as AFL Central Victoria acknowledges the long-time backer and naming rights sponsor of the Loddon Valley FNL.

AFL Central Victoria has teamed up with Bendigo Bank to run a referral program.

By taking your banking across to Bendigo Bank your club will receive a percentage of the profits.

On the footy field, the Bulldogs and Bears meet in Sunday’s elimination final at Discover Marong Oval in Marong’s Malone Park, which follows Saturday’s qualifying final between Marong and Bridgewater at Serpentine’s Janiember Park.

The senior matches start at 2.15pm.

Restrictions on Melbourne-based players because of the Covid lockdown will hurt some clubs more than others.

Stakes are much higher for Pyramid Hill and Bears Lagoon Serpentine who met in last Saturday’s finale to the home and away series at Serpentine.

The Bulldogs will be without gun full-forward Braidy Dickens who has kicked 50 goals and Mitch Dingwall.

There was little between the teams in the round 18 showdown.

Pyramid Hill had drawn level on 66-all at a quarter to play.

The Bulldogs scored 2.4 to just two points in the final term to complete an 82-68 victory.

One of several key recuits at Pyramid Hill, Jacob Heavyside was best afield as Dylan Morison, James Blood, Adrian Holland and Bailey Goodwin were among the best.

The first meeting of these teams this season was in round nine on June 26 at Pyramid Hill’s Mitchell Park.

Bears Lagoon Serpentine fought back to win the second half, 37-34, but it was Pyramid Hill which marked a 94-49 victory.

The Bears attack was led by James Rippingale on four.

Marong and Bridgewater have worked hard to earn the double chance.

Both teams finished a stop-start run to the finals on identical win-loss records of 10-2.

Marong’s only change was Carl Thiesz in for Chris Ling.

The only meeting this year was on May 15 when Bridgewater won the round six clash at Marong by 20 points.

A premiership-winning coach with Bridgewater and Sandhurst and former AFL player at Richmond and Carlton, Andy Collins led the Machine’s attack on four goals as Nic Hall and Harry McKinley added two each.

Bridgewater’s best in the win against the Panthers were Jarrod Fitzpatrick, Alex Powell, Jake Rusbridge and Tom Dowd.

Both line-ups have plenty of running power and skill through the on-ball divisions and midfield.

Key players for the Panthers include Justin Hynes in the ruck, rover Nathan Devanny, ruck-rover Corey Gregg, versatile big man Richard Tibbett on a wing, and Adam Ward in the centre.

They will be up against the likes of Cameron Ross, Boden Alexander, Jarrod Fitzpatrick, Peter Rothacker and Liam Jacques.

A major challenge for Bridgewater will be limiting the supply to Marong’s attack.

In round six, Brandyn Grenfell was not in Marong’s team.

Since he joined the Panthers, Grenfell has kicked 39 goals in six matches.

There is plenty of goalkicking power in the Mean Machine line-up.

Josh Martyn racked up 57 goals in 12 matches to claim the league’s goalkicking award.

Alex Powell, 27; Andy Collins, 20 in seven games; Jarrod Fitzpatrick, 20; and Lloyd Needs, 17, have capped off a lot of Bridgewater’s teamwork.

The X-factor is Darren Clutton in a forward pocket.

They will be up against a Marong defence led by Corbin Fleming, Harry Graham, Ben Gregg, Josh Cooper and Jacob Ede.

The winner of the qualifying final will meet the unbeaten Mitiamo, which is chasing back-to-back premierships, in the second semi-final.

Play on Saturday at Serpentine kicks off with the under-18s first semi-final between Bridgewater and Inglewood at 10.40am.

The reserves qualifying on Saturday at Serpentine features Mitiamo and Maiden Gully YCW Eagles at 12.30pm.

Elimination finals on Sunday at Discover Marong Park begin at 12.30pm when Pyramid Hill and Bridgewater do battle in the reserves.