CVFLW | Preview Round 13 (PINK ROUND) 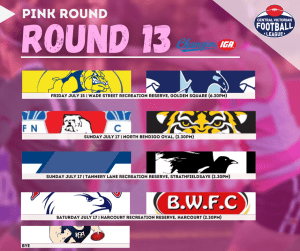 This weekend marks a very important round for the Champions IGA CVFL Women’s, being the ‘Pink Round’, to shine a light on breast cancer and to recognise our community members diagnosed with the devastating disease, as well as their support networks.

The Pink Round theme was initially started by Strathfieldsaye FNC in 2019, with their Women’s and Juniors wearing Pink Round designed jerseys.

This year, the CVFL Women’s has extended the Pink Round, with each side having different initiatives over the weekend to highlight the message of support. For example. Golden Square Women’s team will be wearing specially designed Pink jerseys, with other team to wear pink socks.

The Champions IGA-backed CVFL senior women’s football competition will mark the start of Pink Round in Friday night’s 13th round match between Golden Square and Eaglehawk at the Wade Street ground.

The Bulldogs and Hawks will clash under the Fur Life Oval lights from 6.30pm.

Both teams will be keen to be back on field after a bye last round.

The second-placed Golden Square will be wary against an opponent that is fighting to gain a place in the top four.

Golden Square has not played since the Pride Cup Round match against North Bendigo on June 17.

The Geoff West-coached Eaglehawk has won its past three matches by big margins.

The Hawks know the pressure and run from the Bulldogs’ midfield and onballers will be high.

It’s a tough task for the Ricky Crotty-coached North Bendigo as Kyneton chases a hat-trick of wins and chance to strengthen its position in the top four.

The Jake Donegan-coached Storm will place a lot of focus on centre clearances and stoppages in a bid to halt supply to Castlemaine’s powerful attack.

The unbeaten Castlemaine is back in action after Kerang forfeited last Sunday’s match at Camp Reserve.

The Magpies have not played since their Pride Cup win at Kyneton on June 18 where Shelby Knoll kicked five goals and Tia Davidge, Michelle Barkla, Meg Ginnivan and Eloise Gretgrix were best for the Tiahna Cochrance-coached team.

Bendigo Thunder will play Mount Alexander Falcons at Harcourt Recreation Reserve for their scheduled practice match. while Kerang have the bye.

Game seven in the CVFL practice match series will be played on Sunday when Mount Alexander Falcons take on Bendigo Thunder.

The Falcons and Thunder showdown starts at 2.30pm at Harcourt Recreation Reserve.