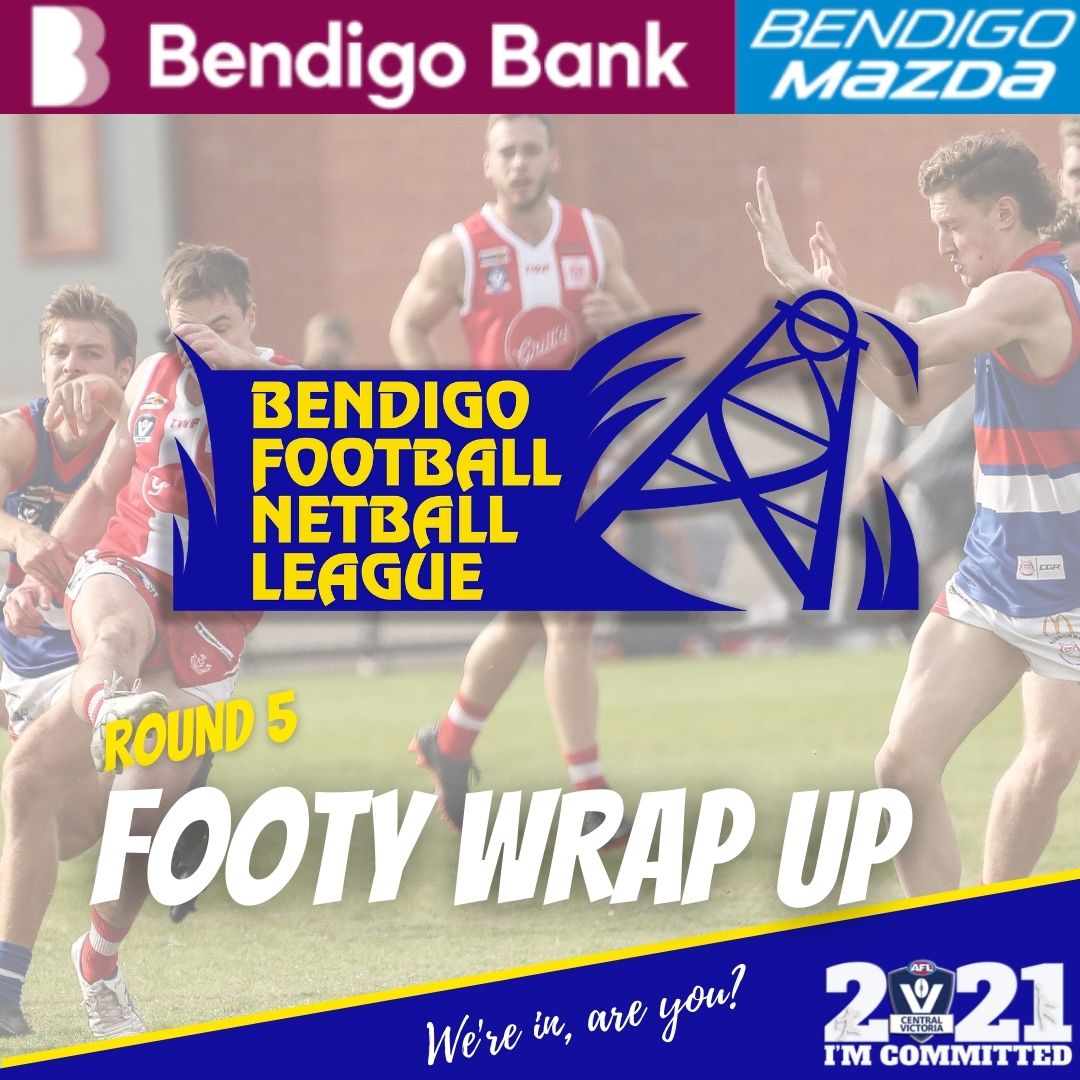 The chance to hold or take top spot on the ladder was up for grabs as the Dragons and Bloods were both unbeaten after four rounds.

It was the Ashley Connick-coached Sandhurst which controlled most of the first half.

The Dragons goaled by the 30-second mark of the match through Joel Wharton.

South Bendigo replied through Kaiden Antonowicz, but Sandhurst veteran and gun onballer Blair Holmes was on target to lead 17-8 at quarter-time.

The Dragons went further ahead through Lachlan Zimmer in the second minute of the second quarter.

A run of four behinds by the Bloods became worse when Oscar McKinley and Holmes goaled for Sandhurst to lead 37-12.

The Bloods struck back with majors by Michael Herlihy and Oscar White to be within a goal at half-time.

A brilliant third quarter by Sandhurst in which it had plenty of run from half-back and midfield was marked by three goals by the classy Joel Wharton and another by talented youngster Mitch Rovers.

Inaccuracy was a downfall for both teams.

The Dragons added 4.5 in the third as the Bloods score of 1.5 included a goal by Sunny Brazier.

Sandhurst held a five-goal margin going into the final term.

The Nathan Horbury-coached South Bendigo clicked into another gear.

After being outgunned at centre breaks and many clearances, the Bloods suddenly found a way to hit targets in attack.

A hat-trick of goals by Antonowicz and a major by Brock Harvey put South up, 69-67 in the 18th minute.

Sandhurst replied with a great shot by key forward Matt Thornton from a tight angle in the South Bendigo FNC social rooms pocket.

A Brazier snap put the Bloods back in front just seconds into time-on.

It then became the “Montague Show” as the 2016 premiership player snapped consecutive goals within 22 seconds.

After a contested mark about 35m out, Montague was the recipient of a 50m penalty for an off the ball incident.

His third goal in just over four minutes put the Dragons up by 15 points in the 26th minute.

Recruited by Sandhurst for the 2014 season, Montague’s 69th senior game for the club was arguably his best so far.

Hopes of a Bloods’ victory flickered when Brazier goaled, but it was to be the final score of the match as Sandhurst won 91-82.

The Dragons have won six in a row against the Bloods.

Eaglehawk claimed the Pride Cup and premiership points in a 109-68 victory on Kyneton’s turf at Kyneton Showgrounds.

The Hawks led 33-18 at quarter-time and surged to a 39-point lead by the long break.

Kyneton never stopped trying, but the Travis Matheson-coached Hawks had the answers as they scored 5.5 to 3.5 in the third term.

The Paul Chapman-coached Kyneton fought on to win the final quarter, 23-13.

The in-form Noah Wheeler and Billy Evans won plenty of contests for the Hawks to be best, along with Joel Mullen, Jack Lawton, Davis and Ben Thompson.

Golden Square returned to the winner’s list after a 25-point victory on Maryborough’s turf at Barkers Oval in Princes Park.

Inaccuracy by the Bulldogs meant the Magpies were right in the game at three quarter-time.

The Christian Carter-coached Bulldogs scored 3.2 as the Pies added two goals to seal a 79-54 victory.

Tom Strauch marked his fifth senior game by kicking three goals for the blue and gold as Joel Brett chipped in with two.

A dozen goals by Gisborne captain and star forward Pat McKenna were the highlights in an emphatic victory by the Bulldogs on home turf against Castlemaine at Gardiner Reserve.

Back in attack after being away the previous round for his brother’s wedding, McKenna was in superb form.

Gisborne led 57-nil at quarter-time and held a 100-point lead by half-time.

The Rob Waters-coached Bulldogs did not ease the pressure as they scored 10 goals in the third and seven in the final quarter to complete a 225-13 victory.

Up against his former club for the first time, Jake O’Brien kicked four goals.

Goalkickers for Castlemaine were Declan Slingo and John Watson.

Sharp’s season tally is now 27 and he leads the race for the Ron Best Medal, a feat he has done many times as the league’s leading goalkicker.

Storm led 109-6 at three quarter-time, but the Roos fought out the contest to score three goals in the last term.

Match of the day in Saturday’s sixth round will be Eaglehawk against Gisborne at S & R Park in Eaglehawk’s Canterbury Park.

South Bendigo is back at Queen Elizabeth Oval to face Strathfieldsaye Storm.

The Kangaroo Flat and Golden Square will played as a stand-alone game on Saturday, May 22 at Bendigo Mazda Oval in Kangaroo Flat’s Dower Park from 4pm.