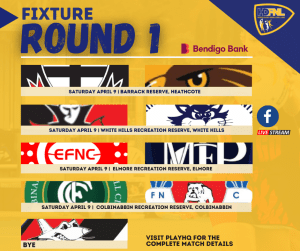 ANOTHER chapter in the rivalry between Colbinabbin and North Bendigo will be written in Saturday’s second of the Bendigo Bank Heathcote District Football Netball League’s senior footy season.

Colbinabbin will be desperate to break the Bulldogs’ winning run against it when they meet on the Grasshoppers turf at M.J. Morgan Oval.

Since 2018, North Bendigo has won seven of the eight showdowns between the clubs.

In their only meeting last year, North Bendigo won a fierce contest, 64-58 at home.

The Hoppers and Dogs met four times in the 2019 season.

North Bendigo won both home and away matches, but it was the Grasshoppers who scored a 26-point win against the Dogs in the second semi-final at Heathcote’s Barrack Reserve.

Two weeks later though it was North Bendigo which won 70-34 in the grand final at Huntly.

Three of the Dogs’ best that day, Jordan Ford, Shane Harris and Aarryn Craig are in the team to play at Colbo this round.

In 2018, North Bendigo won the preliminary final against Colbinabbin, 127-88 at Toolleen.

Both teams started this season with a victory.

The Bulldogs were pushed all the way in a 118-108 win against Heathcote at Hibo Hotel Oval in North Bendigo’s Atkins Street.

Matt Gray and Dylan Klemm booted four goals as Jordan Ford and Storm Giri chipped in with three apiece for the Dogs.

It was another outstanding game by Ford who marked his 150th for the club by starring at centre half-back.

A key for the Robert Bennett-coached Bulldogs at Colbo will be the onball and midfield duels where Aarryn Craig, Beau Cross, Nic Waterson are capable of winning plenty of the ball.

After a six-goal haul in Colbinabbin’s win against Elmore, Laine Fitzgerald will be a major focus for the North Bendigo defence.

The Julian Bull-coached Grasshoppers dominated after half-time to beat the Bloods, 150-61.

A new-look White Hills takes on the powerful Lockington Bamawm United in the Demons’ den at Scott Street.

Jack Fallon steps up to be senior coach after the departure of Sam Kerridge.

A key for the Demons will be strong defence, not just by the back six, but all over the ground.

The Brodie Collins-coached Cats have plenty of pace, skill and attacking options.

The Cats also welcome Riley McIvor, a premiership winner with Eaglehawk who could play across the half-back line, midfield, or attack.

After such a positive start to the season on North Bendigo’s turf, Heathcote is at Barrack Reserve to take on Huntly.

The Andrew Saladino-coached Saints could be a dramatic improver this season.

The classy Codie Price will again set up a lot of play with his carry and run from half-back.

A tough start for Elmore rolls on as the Bloods meet Mount Pleasant at Elmore Recreation Reserve.

The Bloods put together a brilliant opening quarter at Colbinabbin, but were overwhelmed after the first break.

Jointly-coached by Dylan Friedberger and Dylan Gordon, Elmore’s onballers and midfield are up against one of the league’s best.

Stars for Mount Pleasant include Adam Baird, a Michelsen medallist when at Golden Square; ruck-rover Billy Mahony, full-forward Ben Weightman; and Travis Baird across the half-back or half-forward line.

Recruits for the Blues who are jointly coached by Darren Walsh and Adam Baird include brilliant ruckman Chris Down from Sandhurst, Zane Keighran from Golden Square,  and Zac Featherby from Strathfieldsaye.

Leitchville Gunbower has the bye.

First game for the Bombers is on Easter Saturday at Huntly’s Strauch Reserve.