FOOTBALL WRAP UP | Round 2 HDFNL 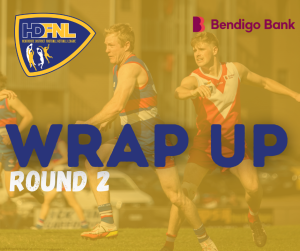 LEITCHVILLE GUNBOWER ended its winless run in senior footy as it scored a one-point victory in its first match of the 2022 Bendigo Bank Heathcote District Football Netball League season on Easter Saturday.

The Bombers took on Huntly in the Hawks’ nest at Strauch Reserve in round two, but week three of the season.

It was the Hawks who made a flying start to the contest and led 25-7 at quarter-time.

The Tim Bannan-coached Bombers fought back brilliantly to score 5.1 to 3.2 in the second to be within seven points at half-time.

Led by the play of Josh Hawken, Jobee Warde and forward Blake Azzopardi, Leitchville Gunbower charged to a 10-point lead at a quarter to go.

The Stacy Fiske-coached Huntly won the last term, 29-20, but it was Leitchville Gunbower which triumphed 84-83.

Azzopardi kicked a match-high seven goals to be among the best with Hawken who kicked three majors, ruckman Warde, Leyton Shenfield, Blake Cooke and Mitchell Candy.

The Bombers had not won a senior match since round 16 of the 2019 season when they beat Huntly by 55 points on August 3 at Gunbower.

It was a memorable day for Riddick as the young full-forward kicked 10 in a 99-point win by the Bulldogs’ under-18s against the young Bloods.

In the senior clash, Riddick mainly played from a pocket or across half-forward where his athleticism and marking power were to the fore.

The Bloods applied plenty of pressure in the opening term and were rewarded with goals by Darcy Laffy and consecutive majors by Nic Palmer as they raced to a 20-10 lead.

The Bulldogs fought back through captain Aarryn Craig with a snapshot on goal and then another after he broke through a tackle and made no mistake.

It was then Riddick who took a strong mark and kicked goal number one for the Dogs to lead 29-20 at quarter-time.

Both teams added three goals apiece in the second as North Bendigo led 53-39 at half-time.

A contested mark and goal by Nick Page gave the Bloods the ideal start to the third term.

The Robert Bennett-coached Bulldogs then upped their intensity and run and were rewarded with goals by Riddick, Manny Thalasinos, Craig and Shane Harris to lead by 31 points.

The talented Rhys Holmberg showed his marking power to score consecutive goals to trim the margin, but Dylan Klemm, Matt Gray and then another two by Riddick capitalised on North’s dominance off half-back and through midfield.

A major blow for the Bloods was a groin injury to co-coach and gun ruckman-forward Dylan Gordon which led to him being on the sidelines in the second half.

Elmore’s other co-coach Dylan Friedberger also did not play.

Lockington Bamawm United’s scoring power was on show against Heathcote at Lockington.

Other multiple goalkickers for the Cats were Marcus Angove, Jarod Bacon, Jacob Gardiner and Anthony McMahon on two each.

Leading goalkickers for the Saints were Jack Brooks, Connor Hamilton and Jackson Jones on two.

Four of Mount Pleasant’s big guns – Ben Weightman, Adam Baird, Zane Keighran and Chris Down were in top form as the Blues beat White Hills by 76 points at Toolleen.

A star goalkicker for Mounts and previously Kyneton, Weightman booted four goals and was best afield in thw 21.13 (139) to 9.9 (63) victory.

A Michelsen medallist and premiership winning onballer with Golden Square, Baird has started his second season with the Blues in top form.

Keighran and top ruckman Down have joined the Blues from Golden Square and Sandhurst respectively and won plenty of contests on Saturday.

Huntly has the bye