Demons turn up heat to beat Bulldogs at White Hills 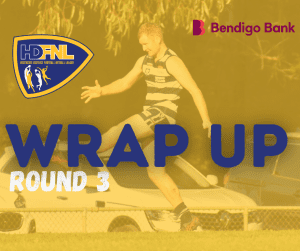 FOOTBALL WRAP UP | Round 3 HDFNL

WHITE Hills turned up the heat in the second half to score a two-goal victory against North Bendigo in Saturday’s third round of senior footy action in the Bendigo Bank Heathcote District Football Netball League.

Desperate to avoid a hat-trick of defeats to start the season, White Hills was within five points of an accurate North Bendigo which had scored 10.2 by half-time of the contest on the Scott Street ground.

The Jack Fallon-coached Demons then scored 5.5 to 1.5 in the crucial third quarter to lead 92-73 at a quarter to go.

Cohen Kekich kicked four goals for the Demons as Mitch Dole, Patrick Eefting and Bayden Fallon chipped in with two each.

Leading goalkickers for the Robert Bennett-coached Bulldogs were Jordan Ford and Matt Gray on four each, and Dylan Klemm on three.

Back in for the Bulldogs after being sidelined by injury the previous round, Jordan Ford was best for North Bendigo along with Lachlan Ford, Gray, Ryan Gow, Marcus Rogers and Sean Moyle.

After the bye at Easter, Colbinabbin was back on turf to take on Elmore on the Bloods’ turf.

It was the second time in a month the Bloods and Grasshoppers had clashed.

The Dylan Friedberger and Dylan Gordon-coached Elmore put in a superb effort to lead 40-29 at half-time.

Colbinabbin struck back to win the third term, 22-15, but the Bloods held a four-point going into the final quarter.

Led by the play of Jed Brain, Luke Moore and ruckman Hadleigh Sirett, the Julian Bull-coached Colbo lifted to score 7.6 to 2.2 in the last.

At the final siren it was the Grasshoppers in front, 99-69.

Leading goalkickers for the Bloods were Tannar Cerrone and Sam McHale on two each.

Mount Pleasant was too strong for Heathcote on the Saints’ turf at Barrack Reserve.

The Blues led 35-10 at quarter-time, but the Andrew Saladino-coached Saints struck back to win the second, 26-15.

Mounts’ key forward Ben Weightman went on to kick a match-high six goals in a best afield performance as the Blues dominated the second half scoring 11.1 to 4.6 to win 117 to 66.

Leaders of the Heathcote attack were Jack Brooks and Connor Hamilton, two each.

A week after a long-awaited victory, Leitchville Gunbower was back on the Gunbower turf to take on Lockington Bamawm United.

The Tim Bannan-coached Bombers worked hard, but LBU had too much running power through midfield and attacking options to hold across four quarters.

The in-form Ben Fulford was a driving force in attack as he kicked seven goals for LBU as Tyler Phillips, three; Marcus Angove and Coby Cox, two each, were the other multiple goalkickers.

In next Saturday’s fourth round, Colbinabbin takes on White Hills at M.J. Morgan Reserve in Colbinabbin.

Lockington Bamawm United and Huntly meet in the clash of the Cats and Hawks at Lockington.

It’s a rest for North Bendigo and Heathcote who met in the season opener on April 2 where the Bulldogs won a closely-fought match, 118 to 108 at Hibo Hotel Oval in North Bendigo’s Atkins Street.