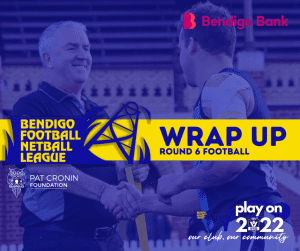 EAGLEHAWK scored a decisive victory against Sandhurst in the Pat Cronin Foundation match on Saturday to complete the split sixth round in the Bendigo Bank Bendigo Football Netball League’s senior footy season.

Not only were premiership points up for grabs, but the day was a showcase for the work of the Pat Cronin Foundation, raising awareness about the dangers of the “Coward Punch” and  a fund-raiser to continue its Be Wise program in sporting clubs, schools, and across the community.

On the football field, Eaglehawk won every quarter in a terrific contest between two of the league’s biggest rivals.

The Travis Matheson-coached Eaglehawk turned a seven-point lead going into the second half into a 14-point buffer as they lined up for the last term.

It was a vastly different attack for Sandhurst after its wins against Kangaroo Flat and Golden Square.

The Dragons were without Cobi Maxted, VFL with Collingwood, and Sean O’Farrell, injured.

Not named in the Sandhurst team on Thursday night because of a Play HQ glitch, Lee Coghlan did play and was among the best.

The classy and elusive Joel Wharton kicked a match-high five goals for the Dragons as six team-mates added a goal apiece.

Indigenous Round will be played next Saturday.

Feature match is between Golden Square and Castlemaine at Fur Life Oval in Wade Street.

Match of the day status goes to Eaglehawk and Kyneton as the Hawks and Tigers prepare to meet on the Borough’s turf at Canterbury Park.

Kangaroo Flat faces the unbeaten and ladder-leading Gisborne on the Roos’ ground at Dower Park.

Maryborough tackles Sandhurst on the Magpies’ turf at Princes Park.