HDFNL Football | Round 15 WRAP UP

The Cats led 32-0 at the first break of the showdown between first and second at Lockington.

Mount Pleasant hit back to win the second term, 27-14, but the Brodie Collins-coached LBU put the result beyond doubt when it added 6.2 to 1.2 in the third quarter.

Ben Weightman marked a return from injury for Mounts and kicked a match-high five goals.

Heathcote made a superb start to its clash with Elmore on the Saints’ turf at Barrack Reserve.

The margin was 22 points by the long break after the Bloods scored 5.3 to 1.1 in term two.

Heathcote held a six-goal lead at the final term and went on to win 105-78.

Leitchville-Gunbower marked another strong first half when it was within four points of Colbinabbin at half-time of the match at Gunbower.

The Julian Bull-coached Grasshoppers led 46-42 at the long break and then added 8.3 to 3.0 in the third term.

Led by the play of James Brain, Laine Fitzgerald and Michael Battista, Colbinabbin kicked on to win 118-72.

It was a rare feat by Leitchville-Gunbower which finished with 12 goals, zero behinds.

North Bendigo won every quarter on its way to a 102-40 victory on Huntly’s turf at Strauch Reserve.

Bulldogs’ ruckman Jeremy Lambden continued his outstanding season at centre ball-ups and stoppages as Jordan Ford was strong in defence, Storm Giri’s attack at the contest and tackling was a highlight.

After kicking 12 goals in the under-18s clash to move to a season tally of 97, North Bendigo young gun Cody Riddick added four goals in the senior match.

The classy Hakeem Johnson booted three goals, but injured his hamstring late in the game.

Bulldogs’ key forward Matt Gray was concussed in the final quarter, and captain Aarryn Craig did not play the second half after injuring an ankle in the second term.

Highlight of Saturday’s round 16 action will be North Bendigo against Lockington Bamawm United at Hibo Hotel Oval in North Bendigo’s Atkins Street.

White Hills and Heathcote meet in a contest that could decide fifth place in the Demons’ den at Scott Street. 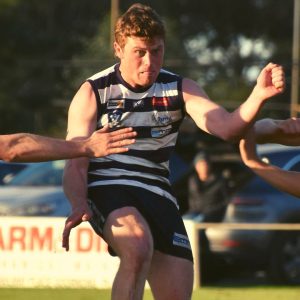