Mount Pleasant Football and Netball club for many years has been a family affair for Judy Ryan and her family. Her husband has been trainer and president, her children have been involved in Mount Pleasant football and netball teams and Judy herself has played, umpired, mentored, tested, coached, and given her time to the board as a delegate, treasurer and  secretary within Mount Pleasant Netball and the Heathcote District Netball association.

She began with Mount Pleasant in the early 70’s, reminiscing about her time on the netball court in defence. During her playing career, Judy played over 200 senior matches. Following in her older sister’s footsteps, at 17 years of age, Judy also began umpiring as a Mount Pleasant representative. 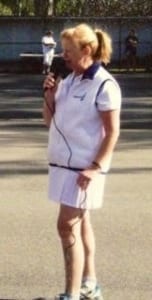 “It’s the community and people you get to know”, Judy shared. “The friendships they all last for life. In your own club, other clubs and the communities these teams come from”.

“Netball is such a big part of country communities”, believes Judy, who was honoured with her Heathcote District life membership at a league presentation day.

Judy has always been very passionate about netball. “I see the benefits for the younger children, sport can really set them up for life. Nothing else comes close to the benefits sport provides in the development of children”.

Judy herself has benefited from Mount Pleasant netball in her childhood and has had the opportunity to watch her daughter and son play for Mount Pleasant.

“People ask why I’m so passionate about sport and all the time I give to Mounts and the Heathcote District League, but people like me who volunteer their time don’t look for acknowledgments. We do it for the passion of the sport”.

Judy has had the beautiful experience of watching the Heathcote District League’s netball competition grow. When she first began playing, only A and B grade teams existed, before eventually C grade as a non competitive competition was introduced. “We have such a strong competition now”, she proudly shared. “It’s so great for the league that clubs have so many teams, from primary school onwards. It reflects how strong we are. It’s so important to provide a pathway for the regional girls. This provides them the opportunity to move to Melbourne sides. Players are getting noticed in our league, and they deserve to. We have such talented senior netballers, it’s amazing that the younger ones can look up to these girls”.

Looking back on her many years involved with netball, and Mount Pleasant unsurprisingly Judy has a few special memories, but “it’s when netball and football premierships are in the same year”, that is the most special times. “It’s so exciting for Mounts, especially the celebrations. It’s these memories I will hold onto forever”.