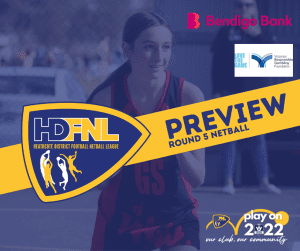 UNBEATEN status of White Hills and Elmore is at stake in this Saturday’s fifth round of A-grade netball in the Bendigo Bank Heathcote District Football Netball League.

The Demons and Bloods will meet on the Scott Street court in White Hills.

The Lauren Bowles-coached White Hills has again shown it will be a top contender for this year’s premiership.

In their latest hit-out the Demons won 51-30 on Colbinabbin’s court at M.J. Morgan Oval.

White Hills will be primed for what’s likely to be a fast-paced and high-scoring contest.

The Demons and Bloods have plenty of running power and skill in mid-court, and powerful attacking combinations.

A great run by Elmore has included wins against Colbinabbin, away and home, at home against Mount Pleasant, and at North Bendigo.

The Bloods had a rest last round, so that may work in their favour.

The Hawks had to work hard for a three-goal victory at Lockington last round as Mount Pleasant beat Leitchville Gunbower by 25 goals at Toolleen.

It’s a crucial contest as Huntly can strengthen its hold on the third rung, while Mounts eye a hat-trick of victories.

The Blues have won their past two games – Heathcote (away), and Leitchville Gunbower (home).

After last Saturday’s rest, Heathcote is back on the Barrack Reserve court to take on Colbinabbin.

The Saints have a 2-2 record which includes wins against North Bendigo and Lockington Bamawm United, and losses to Heathcote and Mount Pleasant.

It’s been a tough run for a new-look Colbinabbin which has played Elmore twice in the opening four rounds.

The Grasshoppers will be confident of chalking up win number two and making a jump toward the top five.

Leitchville Gunbower will chase its second win of the season as North Bendigo aims to break the ‘duck’ when they play at Leitchville.

The Lauren Dehne-coached Bombers won at Huntly on Easter Saturday, but since then have lost to LBU and Mount Pleasant.

The run for the Shellie Davies-coached North Bendigo began at home against Heathcote and was followed by games at Colbinabbin, and then against the powerful Elmore (home) and White Hills (away).

North Bendigo had a rest last Saturday, so will be fired up for this contest.