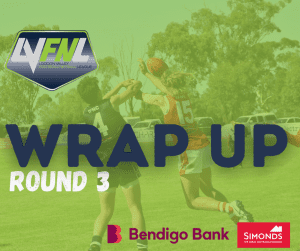 The Panthers and Superoos clashed on the Superoos’ turf at John Forbes Oval.

Unbeaten since the 15th round of the 2019 season, Mitiamo was aiming to chalk up 21 wins in a row.

The Marcus McKern-coached Superoos worked hard to lead 50-40 at half-time against the in-form Panthers.

Marong turned the game in the third quarter as it added 4.3 to 1.3.

Led by the play of David Johnstone, Brodie Hartland, Jack McCaig and Kyle Manley, Marong won the last term, 22-15, and the contest, 89-74.

The Mitiamo defence worked hard to limit the impact gun forwards Brandyn Grenfell and Kain Robins had on the contest, but the Linton Jacobs-coached Panthers found other avenues to goal.

Johnstone capped a best on ground performance by kicking two goals, as did Ryley Taylor, while Grenfell ended with a team-high three majors.

Closest match of the day was at Marist College Oval where Maiden Gully YCW took on Newbridge.

The Eagles and Newbridge were desperate to break their season duck.

Fans were in for a thrilling finish after Newbridge scored 1.3 to a point in the third term to trail 46-47 at a quarter to go.

It was the Luke Freeman-coached Newbridge which finished the game full of running as it scored 2.4 to 1.1 to win 62-54.

Last season’s Harding medallist Harry Whittle played a superb game for the Maroons by kicking four goals in a best on ground performance.

Recruited from South Bendigo, Tyler McLeod marked his best for the Maroons as another former Bloods’ team-mate, Mitch Hocking won plenty of the ball.

A well-rested Pyramid Hill was too strong for Bears Lagoon Serpentine on the Bulldogs’ turf at Mitchell Park.

After a 20-point victory at Bridgewater in round one, Pyramid Hill had the bye and then Easter break.

The Bulldogs made a flying start to the fight with the Bears as they led 44-12 at quarter-time.

The Justin Laird-coached BLS worked hard to win quarter two, 19-16, but a 5.3 to 0.1 run by Pyramid Hill in the third put the result beyond doubt.

Bridgewater denied Inglewood a hat-trick of victories to start the season.

The Rick Ladson-coached Mean Machine was also fired up after consecutive defeats to start the ’22 campaign.

The Mean Machine clicked up a few gears in the next term as it slammed on 7.3 to 1.2.

Former Richmond and Carlton midfielder/forward Andy Collins kicked five goals for Bridgewater as full-forward Josh Martyn also added five on the way to a 19.14 (128) to 8.7 (55) result.

Leading goalkicker for the Darrell Billett-coached Inglewood was Cody Wright on three.

Match of the day in Saturday’s fourth round will be Marong against Pyramid Hill in the Panthers’ den at Malone Park.

Maiden Gully YCW has the bye.