Match on Mitiamo’s court ended in a dramatic tie 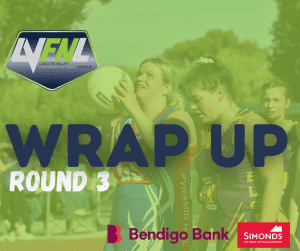 FANS were treated to a thrilling tie as Mitiamo took on Marong in Saturday’s third round of A-grade netball in the Bendigo Bank Loddon Valley Football Netball League season.

The Panthers turned a four-goal deficit at the last change into a one-goal lead at just over 30 seconds to play on Mitiamo’s court at John Forbes Oval.

A four-time winner of the Helen Ward Medal as league best and fairest and premiership star for Mitiamo, Laura Hicks had what would be the final shot at goal to level scores.

Best for the Superoos wer Hicks, Amelia Ludeman in the centre, and Kelly Pay at wing defence.

It’s an unbeaten start to the season for the Laura Hicks-coached Mitiamo and Bianca Garton-coached Marong.

The Superoos face another big challenge in round four on Calivil’s court.

Marong is back on the Malone Park court to take on Pyramid Hill which scored a breakthough 29-18 win against Bears Lagoon Serpentine.

After a two-week break because it was drawn to play Inglewood and then the Easter break, Maiden Gully YCW was back on the court at Marist College Oval.

The Eagles struck back from a first-round loss at home to Marong to score a 65-31 win against Newbridge.

It was another rest for Bridgewater because Inglewood is not fielding an A-grade team.

In this Saturday’s fourth round, Marong and Pyramid Hill clash at Malone Park; Calivil United hosts Mitiamo at Calivil; and Bears Lagoon Serpentine takes on Bridgewater.

Newbridge has a rest in A-grade, but will play Inglewood in the lower grades at Holloway Air Riverside Oval in Newbridge.

Maiden Gully YCW has the bye.