WEDDERBURN fought from a 21-point deficit at the start of the final term to score an 11-point win at Boort in Saturday’s 12th round of senior footy in the Goldacres North Central Football League’s senior footy season.

The Magpies led 26-2 at quarter-time of the clash at Boort Park before the Redbacks scored 3.6 to 0.2 in the second to be within two points at half-time.

The fightback by the Redbacks was led by Jordan Rosengren, Danny Benaim and Joe Lockhart as the red and black slammed on 5.3 to a point in the final term to complete a 77-66 victory.

Benaim and Rosengren led the Wedderburn attack on four goals each.

An evenly fought first term ended with the Tigers in front, 28-19.

From there it was SLN which dominated play as it added 15.12 to 1.2 across the next three quarters.

Billy McInnes led the Tigers’ attack on five goals as Will Simpson, four, and Wade Donnan, three, also did well in the forward 50m arc.

The ladder-leading Birchip-Watchem had 56 scoring shots to one in the clash with Charlton at George Cartwright Oval in Birchip.

Aaron Walklate kicked what would be Charlton’s only score for the contest.

In next Saturday’s play, Wycheproof-Narraport takes on Birchip Watchem in the Demons’ den at Wycheproof.

Sea Lake Nandaly Tigers meet Boort in the battle of the Tigers and Magpies at Sea Lake. 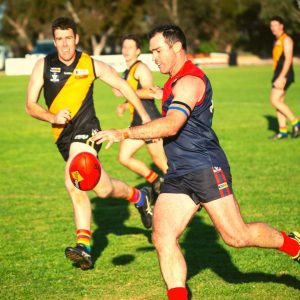