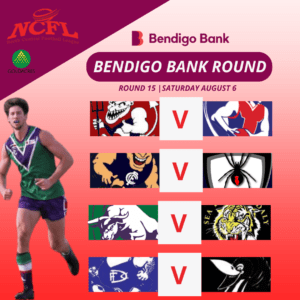 THE ladder-leading Birchip Watchem Bulls will be hunted by the Tigers from Sea Lake Nandaly in this Saturday’s 15th round of senior footy in the Goldacres North Central Football League.

It’s Bendigo Bank round in footy/netball leagues under the AFL Central Victoria banner.

Birchip Watchem has home-ground advantage at George Cartwright Oval in Birchip for the big clash.

When these clubs clashed in round eight it was the Bulls who charged to a 65-point victory in Tigers’ territory at Sea Lake.

The Tigers’ attack was kept in check as Trent Donnan was the only multiple goalkicker on two.

After a 10-goal victory against Wedderburn last round, Birchip Watchem will be aiming to make it two defeats in a row for the Tigers.

The confidence of the Joel Donnan-coached Tigers took a hit in a 21-point loss at Donald.

Sea Lake Nandaly will be desperate to start well on the Bulls’ ground after being down by 26 points at quarter-time last Saturday.

The ladder-leading Donald is on home turf again to take on Boort.

Major challenge for the Andy Hawker-coached Boort will be to limit the impact Donald forwards such as Leigh Burke, James Wall and Josh Potter have on the contest.

The Royals also have the class and running power of Brody Haddow, Ross Young, Ryley Barrack and Ryan Hards.

Boort’s best when it played Donald in round eight were Nathan Twigg, Matt Chisari, Levi Moss and Tom Potter.

In last week’s one-point win against St Arnaud it was Brodie Leonard-Shannon and Cody Gunn who led Boort’s attack on three and two goals.

The Magpies will look to Sam Green, Jesse Muscatello and James Wilson to continue their fine form.

It’s the Demons against the Saints as Wycheproof Narraport takes on St Arnaud at Wycheproof.

Saints’ coach Torin Petrie kicked three goals in a 57-54 win against the Demons at St Arnaud’s Lord Nelson Park in round eight.

The play of Mitch Egan will also be vital to the Saints’ chances.

The Navies will be determined to keep the heat on the Redbacks all match.

It’s been a tough run for the Sam Barnes-coached Wedderburn which is fourth and will play finals.

Jaran McKay kicked three goals when Wedderburn beat Charlton in round eight to be among the best with Tyson Webster.

Leaders in the goalkicking race: