Plenty to play for on Heathcote’s court 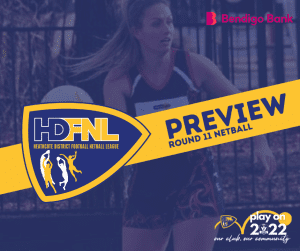 HEATHCOTE and Lockington Bamawm United contest a match crucial for the finals prospects of both A-grade teams in this Saturday’s 11th round of netball in the Bendigo Bank Heathcote District Football Netball League.

The Saints and Cats are both locked on 12 premiership points as they take to Heathcote’s Barrack Reserve court.

Fifth place and a finals berth is held by Heathcote, but only just.

When the Saints and Cats met in round two, Heathcote won 43-38 at Lockington in the Easter Saturday match.

Another big match will be at White Hills where the Demons take on Mount Pleasant at the Scott Street venue.

It’s second against third, although the Demons have a win-loss tally of 8-1, and Mounts is 5-4 after last week’s 25-goal loss to Elmore at Toolleen.

The Blues will need to apply plenty of pressure to a White Hills line-up which poured in 60 goals last round.

The round two showdown between White Hills and Mount Pleasant ended in a 45-34 victory for the Demons.

After a bye, Leitchville-Gunbower will be back on the Leitchville court to take on Huntly.

The Bombers stunned the Hawks in round two.

Leitchville-Gunbower marked its first match of the season by winning 47-33 at Huntly’s Strauch Reserve.

The Bombers have marked just one more win since this season.

Huntly has a 3-6 record and must win to stay in touch with Heathcote and LBU in the fight for fifth place.

The unbeaten Elmore is on its court to play North Bendigo.

The Bulldogs are on the rebound from a 26-goal loss at home to Colbinabbin.

Fourth on the ladder, Colbinabbin has the bye.