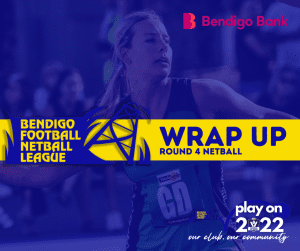 SANDHURST held on for a one-goal victory against A-grade netball rival Kangaroo Flat in Saturday’s fourth round of the Bendigo Bank Bendigo Football Netball League season.

The maroon and blue played out a great match with the Roos on the court adjacent to Queen Elizabeth Oval.

Both line-ups are tipped to be among the frontrunners for this year’s premiership and their showdown did not disappoint the fans.

The Tamara Gilchrist-coached Sandhurst took charge in the third quarter, but the Roos bounced back to be in striking distance going into the final term.

The Jayden Cowling-coached Kangaroo Flat capitalised on some turnovers to draw level in the last, but it was Sandhurst which held its nerve to claim a 52-51 victory.

Further south and Kyneton put in a superb effort on its court at Kyneton Showgrounds to mark a 52-all draw with South Bendigo.

The Tigers followed up their win the previous round at Strathfieldsaye to stay with the highly-rated Bloods until the final whistle.

At Castlemaine it was a great duel between the Magpies and Strathfieldsaye Storm.

The Pies were hot favourite to take the points, but were made to hard work by a desperate Storm line-up.

Castlemaine fought on for a 60-56 result.

Gisborne was too strong for Maryborough at Princes Park.

Eaglehawk broke its season ‘duck’ and hit the 60-goal mark in an impressive performance against Golden Square at Canterbury Park.

A highlight of next Saturday’s fifth round will be South Bendigo up against Castlemaine at Queen Elizabeth Oval.

Strathfieldsaye Storm will play Gisborne at Triple M Park in Tannery Lane, and Maryborough takes on Eaglehawk in the battle of the Magpies and Hawks at Maryborough’s Princes Park.