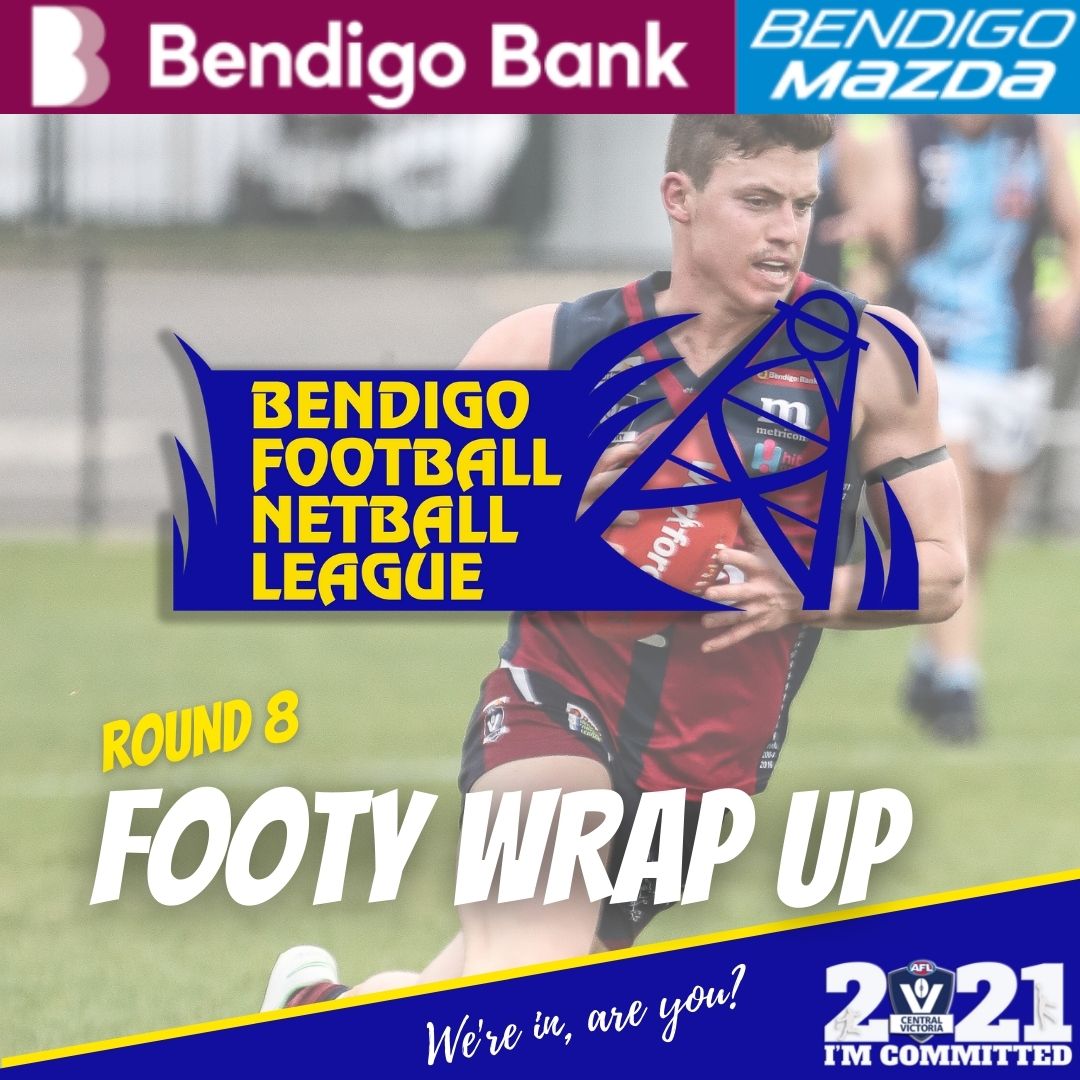 STRATHFIELDSAYE Storm surged to a nine-goal victory on Eaglehawk’s turf in Saturday’s eighth round of senior footy action in the Bendigo Bank Bendigo Football Netball League.

In their first meeting since the 2019 grand final, Storm led by two goals at the last change at S & R Park in Canterbury Park.

Storm unleashed a final-quarter blitz as it slammed on 6.7 to a point to complete a 122-68 victory.

Key forward Bailey Henderson was in superb form in the air and at ground level as he kicked a match-high five goals for Storm.

The reigning premier showed it does not have to rely on gun goalkicker Lachlan Sharp each week as he booted just one major.

Sharp leads the race for the Ron Best Medal as BFNL leading goalkicker on 46.

Cooper Jones, one of many young stars in Storm’s team kicked four goals to lift his season tally to 19,  and Kallen Geary added two majors on a ground he knows well.

A week out from the halfway mark of the season and the form of both teams is in stark contrast to the early rounds.

Storm was in eighth place after it was beaten by Sandhurst and Gisborne in rounds one and two.

Strathfieldsaye is now on a 6-0 streak and likely to be fighting for the crucial double chance at finals time.

The Travis Matheson-coached Eaglehawk now has a 4-4 record.

A tough run by the Borough includes defeats by margins of one and nine points at the QEO against South Bendigo, round two, and Sandhurst, round seven.

Kyneton worked hard to be within 21 points of the unbeaten Sandhurst at half-time at Kyneton Showgrounds.

The Tigers’ leading goalkicker was Ryan Pretty on two.

Not only did Mittell boot two goals, he won plenty of the footy in a best afield performance for the Ash Connick-coached Sandhurst.

Co-captains Lee Coghlan and Nick Stagg played well for the Dragons, as did Brodie Montague and Blair Holmes.

South Bendigo struck back from a hat-trick of defeats to score a 46-point victory against Kangaroo Flat at Queen Elizabeth Oval.

It was a danger game for the Nathan Horbury-coached Bloods as Kangaroo Flat’s confidence was up after victory at Maryborough the previous round.

South Bendigo was bolstered by the inclusion of several of its Melbourne-based players and was in control for most of the contest.

A tally of 27 scoring shots to 11 was an indication of the Bloods’ dominance in the 77-31 result.

Kaiden Antonowicz led South Bendigo’s attack on three goals and now has 28 for the season.

Bloods’ captain Brody Haddow again starred in his onball role to be best afield as Leon, Joel Swatton, Zac Hare, Braydan Torpey and Andrew Vanheumen were among the best.

The Christian Carter-coached Bulldogs won plenty of the ball.

Scoreless the previous week at Strathfieldsaye, the Don Moran-coached Castlemaine worked hard for goals through Klai Jermyn, Will Moran and Sam Nettleton.

The play of Brett in attack, ruckman Matt Compston, onballer Ryan Hartley, Harry Burke and the experienced Dale Lowry were highlights for the Bulldogs.

In the race for the Ron Best Medal as BFNL leading goalkicker, Brett is on 29 goals and Burke on 26.

It was a great afternoon for Gisborne captain and star forward Pat McKenna as he kicked seven goals in another home victory against Maryborough at Gardiner Reserve.

The Rob Waters-coached Bulldogs were fierce at the contest from the opening minute on their way to a 145-15 victory.

McKenna was well supported in attack by Brad Bernacki, Josh Kemp and Jake O’Brien as they added three goals apiece.

A tally of 35 has McKenna in second place for the Ron Best medal.

The Magpies’ goals were kicked by Matt Bilton and Zac Polinelli.

Next Saturday’s ninth round shapes as one of the season’ best as clubs reach the halfway mark.

It’s first against second as Sandhurst and Gisborne clash at Queen Elizabeth Oval.

Another big match will be at nearby Fur Life Vet Oval in Wade Street as Golden Square tackles an Eaglehawk line-up desperate to claw its way back into the top five.

Strathfieldsaye takes on Kyneton in the Storm’s zone at Triple M Park in Tannery Lane.

Maryborough and South Bendigo clash in the Magpies’ nest at Barkers Oval in Princes Park.