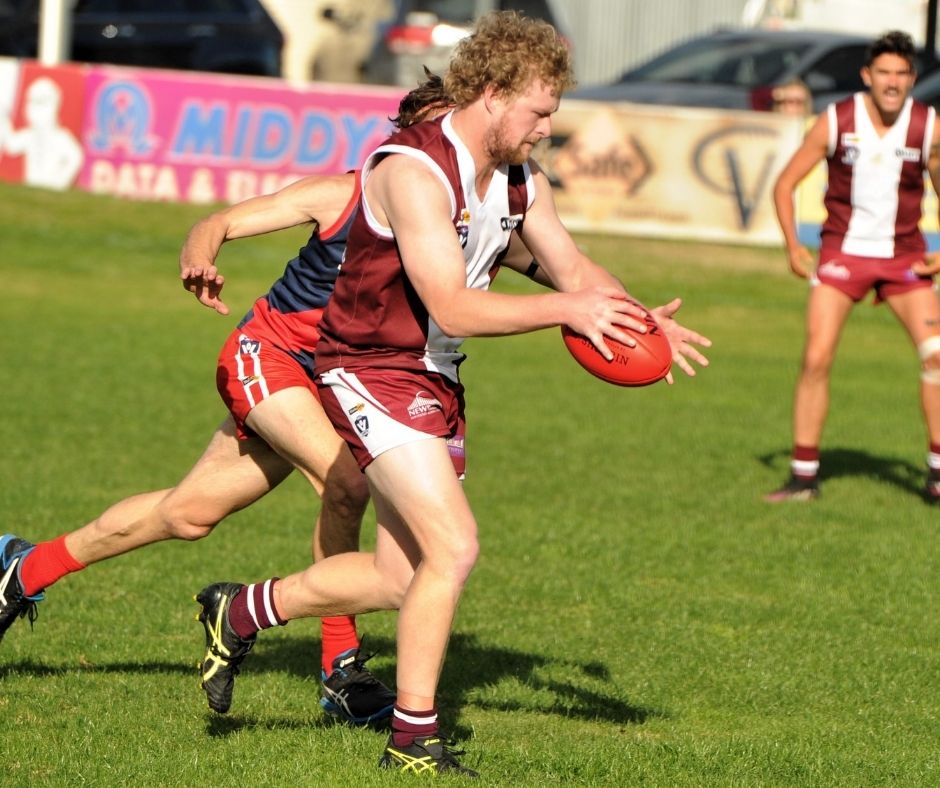 Although the Maroons were victorious in two of 11 matches, Whittle’s skill caught the umpires’ attention as he racked up 15 votes, ratio of 1.36.

Captured in action by the Bendigo Advertiser, Whittle earned the maximum three votes in Newbridge’s wins against Inglewood and Calivil United and the round nine clash with Marong.

Because of Covid lockdowns the season was reduced by five rounds.

Awards were determined on a ratio basis in which votes were divided by number of matches the team played.

“I am shocked, but incredibly proud,” Whittle said after the Bendigo Taxis-backed vote count had been called on radio station Fresh fm 101.5 on Monday night.

“Our coach (Luke Freeman) was texting me during the vote count.

“I didn’t believe him at first, but then the phone calls started coming through.”

A joint winner of the Michelsen Medal when at Eaglehawk in 2001, Lucas Matthews capped another brilliant season for Mitiamo to score 14 votes, but the Superoos played one more game than the Bears.

A Harding medallist in 2017, Marong’s Corey Gregg scored 13 votes, 1.08 ratio, as did Bridgewater’s Alex Powell, who was ineligible because of suspension.

Recruited by Newbridge from Huntly to be an assistant coach, Whittle was runner-up for the Sam Cheatley Medal to clubmate Ryan Semmel as the Heathcote DFNL best and fairest in 2016.

“Being an assistant coach for the first time was a great challenge, but incredibly rewarding,” Whittle said of working with Freeman and the rest of the coaching staff.

“It was a tough season because of Covid, but also because of injuries to quite a few players.

“Our depth was tested a lot, but the guys gave their all,” he said of a squad in which at least a dozen were first-year senior players.

Whittle mainly played in a midfield or onball role, but also spent quite a lot of time in the defensive zone.

“As an assistant coach I learnt a lot, and know there’s a lot more to learn.

“Playing for Newbridge was something I had always thought about,” Whittle said of joining a club his dad, Rod had played for.

“Coaching is a pathway I have thought about and the club gave me an opportunity.”

Whittle, 26, said the next few months will be crucial in terms of recruiting.

“Like a lot of teams, we are after some bigger key position players, but we also know the younger players will keep working and improving.”

Whittle became the fifth Newbridge player to win the Harding Medal and first since Steven Cox in 2003.

It will be another busy summer for Whittle, not only preparing for another footy season, but also leading United’s division one team in the Emu Valley Cricket Association.

It was a medal-winning double for Maiden Gully YCW in the Loddon Valley reserves and under-18 football awards.

Tom Harrington clinched victory in the race for the John Forbes Medal by claiming three votes in the final round of the reserves competition.

A tally of nine votes and ratio of 0.82 was enough for the Eagles to join the John Forbes Medal honour board.

The under-18s was a runaway victory for Cody Riddick.

A great season for the Ben Dyett-coached Maiden Gully YCW Eagles included Oscar Keogh scoring 15 votes, 1.07, to be third in the medal race.

Written by Nathan Dole and photo courtesy of the Bendigo Advertiser.