The Julian Bull-coached Colbinabbin will start favourite to take the points, but also be wary of an opponent which finished within eight points of North Bendigo at Heathcote last round.

In round five, Colbinabbin won 97-64 at Heathcote’s Barrack Reserve after the Saints led 32-6 at quarter-time.

Best for the Grasshoppers in that win were Matt Riordan, Ben Barton, Laine Fitzgerald and Clint Shields.

Third on the ladder, Colbinabbin won its 13th round clash at White Hills by 34 points.

One of several gun recruits for the Saints, Braden Padmore kicked six goals against North Bendigo and will test Colbo all match.

Other players to watch for the Andrew Saladino-coached Heathcote include Codie Price off half-back, Shaun Harrison, Jackson Jones, Billy Price  and Will Long.

White Hills must win at Elmore to keep the heat on Heathcote in the battle for a finals berth.

The Demons were under siege in the final term of their previous clash with Elmore as the Bloods scored 7.3 to 2.2.

At the final siren the Jack Fallon-coached White Hills led 125-108.

The Demons were held to just six goals by Colbinabbin at home last Saturday as Ben Bacon, David Wright and Liam Bartels were among the best.

The Bloods have not played since June 18.

Bloods’ vice-captain Darcy Laffy kicked eight goals against the Demons last time and will be a focal point in an attack that includes Price, Sawyer and Trewick.

Huntly makes the trek to Toolleen for a showdown with Mount Pleasant.

The Blues won the fifth round clash at Huntly’s Strauch Reserve by 101 points.

The Hawks will rely a lot on the experience of coach Stacy Fiske, Jaydon Cowling, Steve Kairn and Tyler Miles.

Pressure through the midfield and at stoppages will be a key for the Hawks in halting the Blues run into the forward 50m arc.

North Bendigo is back at Hibo Hotel Oval in Atkins Street to take on Leitchville-Gunbower.

The Bulldogs won at Leitchville in round five by 79 points as ruckman Jeremy Lambden and Beau Cross were among the best.

Hakeem Johnson has kicked 18 goals in his past three games and could have another big afternoon in an attack that includes Matt Gray and Dylan Klemm. 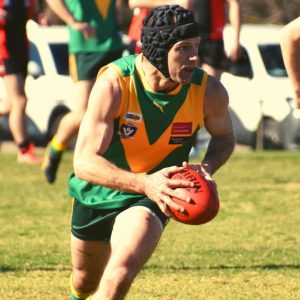