AFL Central Victoria launched the I’m Committed campaign in late 2020 to encourage all football and netball players, coaches, umpires, volunteers and sponsors to return and connect to their community club in 2021.

COVID-19 forced the cancellation of senior football and netball in season 2020 and we are all eager to get back in 2021.

‘I’m Committed’, is to encourage people to connect back to their local club through volunteering, committing to play or umpire or assisting around the club.

It is vitally important that we reconnect the playing group, the coaches, umpires, and volunteers to promote both football and netball and bring the absolute joy of being part of a club and sport back in 2021.

We are excited to announce that the first of the invitational ‘I’m Committed’ preseason tournaments for senior football have now been confirmed, involving a total of 6 senior football teams from across the AFL Central Victoria region.

Matches will be played across two nights at the Epsom Recreation Reserve, with senior teams from Bridgewater, Strathfieldsaye and Wedderburn to play a series of shortened matches in a round robin format on Wednesday the 24th of February.

This will be followed by a second pool of three teams scheduled to play at the same venue on Friday 26th February, featuring Eaglehawk, Golden Square and North Bendigo.

Competing teams will battle out a series of two 15-minute quarter matches against each opposition on the night, as they readjust to match intensity conditions. Random prizes will be awarded to competing teams each night.

Considering the long layoff from competitive senior football, it is anticipated clubs will use the event as a steppingstone to full length practice matches before seasons are scheduled to commence in early April 2021.

Extended benches will also be implemented to maximise participation opportunities during the event.

The tournaments will be COVID safe events in accordance with current State Government and AFL Victoria guidelines, with all attendees required to check-in at the event via QR code. All attendees must adhere to current State Government gathering restrictions, and we ask everyone to remain patient and respect directions from club officials to ensure the safety of the event.

No access will be available to changeroom facilities, and spectators are asked to always maintain social distancing techniques, remain in cars, and limit non-essential movement where possible.

Unfortunately, there will also be no public access to the playing oval before, after or during match breaks, with only players or pre-approved officials allowed match day access to the arena. 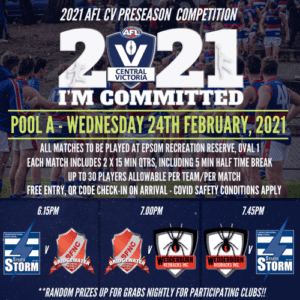 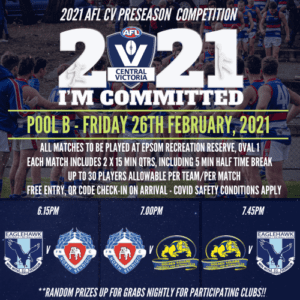