Blues, Hoppers aim to bounce back from defeat 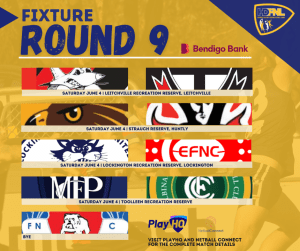 MOUNT Pleasant and Colbinabbin are on the rebound from defeat as they meet in Saturday’s ninth round of A-grade netball in the Bendigo Bank Heathcote District Football Netball League season.

It’s third against fourth on Mounts’ court at Toolleen.

A great run by the Blues was ended in a 37-42 loss to North Bendigo at Hibo Hotel Oval in Atkins Street in round eight.

Colbinabbin was also stung by a 12-goal loss at home to M.J. Morgan Reserve to Lockington Bamawm United.

There is a lot of young talent in both teams who have achieved four wins and are separated on the ladder by percentage.

After a brilliant win at Colbinabbin lifted it to the fifth rung on the ladder, Lockington Bamawm United is at home to take on the unbeaten Elmore.

It’s a daunting task for the Jessie Hardess-coached LBU which has improved dramatically this season.

Elmore is strong in all thirds of the court and should add to its winning streak.

It’s the Bombers against the Saints as Leitchville Gunbower hosts Heathcote at Leitchville.

Rested by the bye, Heathcote should take the points in this contest.

Huntly is up against White Hills at Huntly’s Strauch Reserve.

The Hawks have a difficult run to end the first half of the season.

After a 37-goal loss at Elmore last round, Huntly faces the second-placed White Hills which won its latest match against Leitchville Gunbower by 21 goals.