Cameron Skinner – Happy to give back

“Coaches and mentors can play valuable roles in the development of children. Not just about football, but life lessons too. The lessons and quotes I have been given from coaches in my junior career have stuck with me for life, so much so that I use them with the children I coach today”.

Cameron Skinner began his football journey in the mini league for the Maryborough Football Club, at the age of 8 years old.

At 12 years old he began playing for Maryborough under 14’s in the Ballarat League. After breaking his hip at 13, Cameron was forced to take some time away from the game. Following only a handful of matches in the under 16’s, Cameron became a regular in the under 18’s Maryborough team before graduating to reserves and senior football, which he still plays today.

Cameron played his 400th game of football in June of last season, resulting in holding title as the current games record holder for the club. Since his 1996 senior debut for his beloved Maryborough Football and Netball Club, Cameron has gone on to forge one of the most impressive individual playing careers in the Maryborough football club’s history.

“The club organised a banner before the game, then after the game I hung around for a few quiet drinks with my teammates, family and friends, I didn’t go overboard with celebrations”, he reminisced of the milestone.

The incredible achievement of 400 club matches is a milestone few ever dream about let alone achieve, with Cameron also becoming the first Magpie to reach 300 senior games back in 2015. This personal milestone also culminated in achieving Life Membership with the Bendigo Football Netball League during the same year.

Cameron’s initiation into the Bendigo Football and Netball League senior football was during a golden era of sustained success for Maryborough, playing in the powerful senior side between 1996 and 1999 that regularly finished on top the BFNL ladder, including playing in the famous back-to-back Maryborough premiership sides in 1998-1999.

Cameron has always been recognised for his playing strengths including on-field versatility, impeccable skills, and athletic ability. He is renowned throughout the football community as a dependable teammate, devoted clubman and respected person in general.

With a resolute dedication to the Maryborough FNC during some recent lean years on the field, Cameron is still part of the furniture and the fabric of the club, and is rapt the Magpies are fast developing an exciting and youthful list that is mounting a charge back up the BFNL ladder.

Besides playing, Cameron is also a coach for Maryborough junior football club and the AFL Central Victorian Football Academy.

His input and leadership both on and off the field and work with junior development has been critical in the recent resurgence of the club and the strengthening of the junior to senior pathway.

“I try to teach the kids to enjoy their footy and to be respectful to their teammates and opponents”. He humbly shared.

“The main reason I coach is that my kids also play, but it’s also about staying involved around the club and doing my part to ensure players are graduating through the ranks within Maryborough Football Club. The aim is that hopefully kids will feature in our senior team in the near future”.

Working as an assistant coach with the Academy has helped Cameron develop his skills and knowledge as a junior coach. “I was asked if I would be interested in the opportunity to help coach in 2019 and I thought it would be great to give back to a sport that has provided me with so much enjoyment and would be an excellent way to enhance my junior football coach skills, so I agreed. My eldest son Jack is in currently in the U13 Academy and I assist with the under 12’s on the same night which is convenient for the travel component’’.

Cameron likes to engrain values of respect, teamwork, leadership, work ethic and discipline amongst his junior players along with remaining gracious during both wins and defeats, principles he closely resinates with.

Research has shown the benefits of sport in regional areas. “Kids meet lots of friends and have the opportunity to mingle with a wide range of people from different backgrounds. Being part of a team and developing skills such as leadership and teamwork are vital when kids become adults and move into the work force”, believes Cameron.

Cameron hopes that the 2021 is a season where Covid-19 is a distant bad memory. He hopes that “kids and adults are able to play the game they love and get back to enjoying everything that football has to offer”.

“Football means a lot to me”, he shared. “It has been such a large part of my life. I have been playing for over 30 years and have gained so much out of it”. This includes the numerous people he has met along the journey and the great friends that have resulted.

“Footy and sport in general have been such a huge and important part of my life and always will be”. 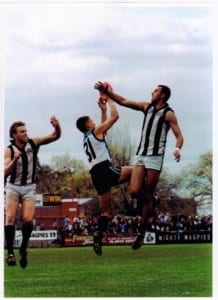 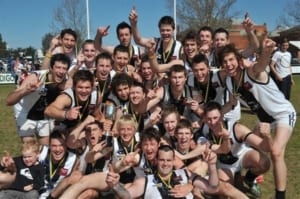