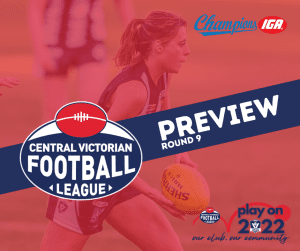 CASTLEMAINE will be aiming to keep its unbeaten record intact when the Champions IGA-backed CVFL senior women’s footy competition hits the halfway mark this season.

It’s been a remarkable run by the Tiahna Cochrane-coached Castlemaine in its first season of CVFL action.

This Sunday the Magpies make the trek to Weeroona Oval in Bendigo where they tackle Bendigo Thunder in round nine from 2.30pm.

It’s first against fourth and a Thunder line-up on the rebound from a 17-point loss on Kyneton’s turf at Kyneton Showgrounds.

A powerful attack for the Jac Louttit-coached Thunder was well held by the Tigers.

On Sunday, Bendigo Thunder will aim to take control of centre breaks and stoppages and generate more supply for the likes of Britney Mueck, Sharni Barker and Georgia Gordon.

Strong defence will be a key to Thunder’s chances.

Castlemaine was in great form as it won Saturday night’s clash with Eaglehawk at the Magpies’ home in Camp Reserve by 79 points.

Shelby Knoll kicked five goals against the Hawks and has a tally of 31 to lead the league’s goalkicking race.

The round kicks off Friday night when Golden Square plays Strathfieldsaye from 7.15pm at Fur Life Oval in Golden Square’s Wade Street.

Strathfieldsaye is back in action after a bye.

The Jake Donegan-coached Storm marked a 64-1 victory in the round seven match on North Bendigo’s ground at Hibo Hotel Oval in Atkins Street.

The classy Lila Keck won plenty of the footy and earned the High Street X-Ray Player of the Round award.

The Geoff West-coached Hawks have a 2-4 record and are eight points adrift of the fourth-placed Thunder.

The Two Blues will look to Chloe Green, Jasmine Burzacott, Anya Cardilini, Lexie Moss and Kirstin Shaw to lead the way to a much-needed victory.

Kyneton and North Bendigo have the bye.