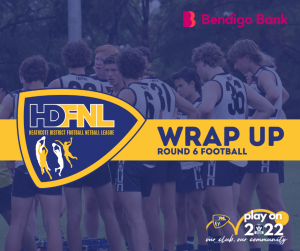 LOCKINGTON Bamawm United marked a 17th consecutive victory in senior footy as it dominated the final term of Saturday’s match against Mount Pleasant in round six of the Bendigo Bank Heathcote District Football Netball League season.

Unbeaten in 12 matches on the way to being declared premier in 2021, the Brodie Collins-coached LBU marked win number five in a hard-fough match on Mounts’ turf at Toolleen.

A high-quality opening term ended with scores locked on 31-all.

Led by the play of Jesse Collins, Lachlan Atherton, Tyler Phillips and gun forward Ben Fulford, the Cats scored 6.4 to 3.2 in the last to claim a 118-87 victory.

The Blues’ attack was led by Ben Weightman, five; Adam Baird and Mitchell Bennett, two each.

It was the end of an unbeaten run in ’22 for the Darren Walsh and Adam Baird-coached Blues in which Fletcher White, Mitchell Bennett, Adam Baird, Billy Mahony, Ben Weightman and Chris Down were best.

Heathcote dominated the second half of its match on Elmore’s turf.

Leading goalkicker for the Bloods was Dylan Oaff with four.

North Bendigo held onto the Golden City Cup after an 87-point win against Huntly on the Bulldogs’ turf at Hibo Hotel Oval in Atkins Street.

The match took on extra significance for North Bendigo, just days after the death of club great Keith Robertson who played a key role in the club’s fight to survive in the early 90s.

Robertson served two terms as Bulldogs’ president, and was later president of the Heathcote DFNL.

The Robertson family links to the club go back many decades.

It was the Stacy Fiske-coached Huntly Hawks who made a great start to lead 18-15 after the Bulldogs scored 1.9 in the first term.

Athletic key forward Dylan Klemm took plenty marks on his way to a match-high tally of seven goals to earn the Keith Robertson Medal as best afield in a 134-47 victory.

Matt Gray kicked three goals in a match where Billy Robertson marked his return to the red, white and blue with a goal.

Ryan Alford goaled from near the coaches box at the Atkins Street end for goal of the day honours.

The Hawks had seven individual goalkickers.

A dozen goals between Jed and James Brain helped Colbinabbin to a big win against Leitchville-Gunbower at Colbinabbin’s M.J. Morgan Reserve.

The Grasshoppers led 43-3 at quarter-time and then slammed on 9.4 a goal in the second term.

The intensity of the Julian Bull-coached Colbo did not ease up in the final hour on the way to a 29.18 (192) to 3.3 (21) victory as Jed Brain kicked seven goals and James Brain added five majors.

Other multiple goalkickers for the green and gold were Luke Moore and Stephen Tuohey, four; and Clint Shields, three.

The Bombers had three individual goalkickers.

A highlight of Saturday’s seventh round will be the showdown between the Cats and Bulldogs as Lockington Bamawm United takes on North Bendigo at Lockington.

Heathcote is back at Barrack Reserve to take on White Hills.