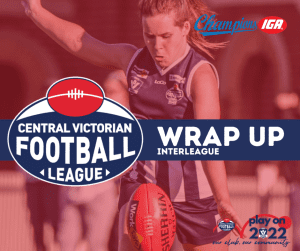 Coached by Hawthorn’s premiership player of 2008 in Rick Ladson, CVFL’s stars shone on the Queen Elizabeth Oval in Bendigo.

In Sunday’s match, a score of 5.7 to nil in the first quarter was a sign of Central Victoria’s dominance at the centre breaks and through midfield.

An attack that included Shelby Knoll, Britney Mueck and Charlotte Beavan was in hot form.

Central Victoria kicked away to lead 60-nil at half-time and then slammed on 6.3 in the third quarter.

Northern Country worked hard to set up attacks, but they were quickly stopped by a tight-knit CV defence.

Now playing with Castlemaine after Kangaroo Flat disbanded on the eve of the season, Shelby Knoll kicked a match-high seven goals.

The Central Victoria FL team which played Northern Country and their clubs:

Less than a week after being team-mates, the stars from Golden Square and Castlemaine will meet in this Friday night’s start to Indigenous Round.

The Bulldogs and Castlemaine will play at Fur Life Oval in Wade Street from 6.30pm.

Action is under lights on Saturday when Eaglehawk plays Kyneton at Canterbury Park from 5.15pm.

Finale to the round is on Sunday when North Bendigo takes on Strathfieldsaye from 2.30pm at Hibo Hotel Oval in Atkins Street.

Bendigo Thunder and Kerang have the bye.