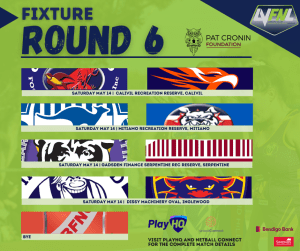 Both teams will be keen to snare the four premiership points on Calivil’s court.

The Demons lead the Eagles by eight points going into this vital contest.

In last week’s play, Calivil United scored a two-goal victory at Bridgewater, while the Eagles soared to a 50-17 win on Pyramid Hill’s court at Mitchell Park.

Mitiamo is back  on court after last Saturday’s rest because Inglewood is not fielding an A-grade team.

The Superoos drew their match with the ladder-leading Marong in round three, but a week later were beaten by 11 goals at Calivil.

The Laura Hicks-coached Mitiamo is likely to have too much run, skill and scoring power for Pyramid Hill to hold across four quarters.

Refreshed by the bye, Bears Lagoon Serpentine will be back on its court at Gadsden Finance Serpentine Reserve to take on Newbridge.

It’s a crucial game for the seventh-placed Newbridge to keep the pressure on the teams above it.

The Maroons are on the rebond from a 31-55 loss to Marong in the Panthers’ den at Malone Park.

It’s a rest for the unbeaten Marong in A-grade, but the Panthers will play Inglewood in the lower grades on the Blues’ court at Dissy Machinery Oval.

Bridgewater has the bye.