Dragons fire up for clash with Kangaroos 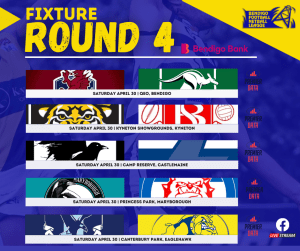 THE powerful A-grade netball teams from Sandhurst and Kangaroo Flat clash in this Saturday’s fourth round of the Bendigo Bank Bendigo Football Netball League season.

Unbeaten run for the Dragons or Kangaroos will be broken in this contest on the court at Queen Elizabeth Oval.

Both teams are stacked with plenty of talent in all thirds of the court.

The Tamara Gilchrist-coached Sandhurst has won by margins of 33, 28 and 29 goals.

It’s not only the scoring punch in the Dragons line-up, but also a defensive line-up that has limited opponents to scores of 33, 28 and 30 goals.

Sandhurst faces a huge test in holding the Kangaroos attack.

The Jayden Cowling-coached Kangaroos have dominated all three matches to win by margins of 38, 69 and 58 goals.

Winner of this match is likely to hold the tag as premiership favourite.

Fans can expect a great contest in which the pressure will be high for every minute.

After breaking its season duck on Strathfieldsaye’s court at Triple M Park in Tannery Lane, Kyneton is at Tigerland to face South Bendigo.

The Tigers played great netball to score a 40-30 win against Storm.

It’s been a tough run for Kyneton which played Castlemaine in its return to A-grade in round one and then met a Gisborne line-up on the rebound from defeat in the match played on Good Friday under the Kyneton Showgrounds lights.

The Jannelle Hobbs-coached South Bendigo will be determined to hit back from a 29-goal loss to Sandhurst in the clash of the QEO co-tenants.

The Bloods made a great start to the season by beating Golden Square by 38 goals and triumphed in the Good Friday match at Eaglehawk by 21 goals.

South Bendigo will start favourite to take the points in what could be a closely-fought match at Kyneton.

The winless run for Eaglehawk or Golden Square is likely to be over after their match at Canterbury Park.

The Borough was outpointed by a ruthless Kangaroo Flat on the Roos’ court last round as Golden Square was beaten at home by Maryborough.

The Alicia Cassidy-coached Maryborough faces a big test at home against Gisborne on the Princes Park court.

After a tough run against Kangaroo Flat and then Castlemaine’s team, Maryborough broke through for a 41-28 win last round.

Gisborne has struck back from a poor start at home in round one to win at Kyneton and then outpoint Castlemaine at Gardiner Reserve last Saturday.

The team in red, white and blue should mark a hat-trick of victories.

The Magpies are yet to be at full-strength on court, but have worked hard to achieve a 2-1 record and occupy fourth place on the ladder.

Storm’s first-up victory was followed by defeats against Sandhurst and Kyneton.

The Storm line-up will apply plenty of pressure, but the Pies look to be too strong.