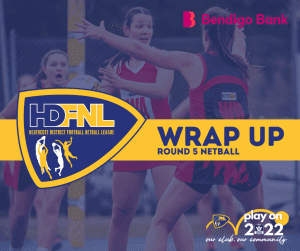 ELMORE’S winning streak is now at 17 after the Bloods won a hard-fought A-grade netball match at White Hills in Saturday’s fifth round of the Bendigo Bank Heathcote District Football Netball League season.

Unbeaten in their run to being declared A-grade premiers last season, Elmore has not let-up in ’22.

The Bloods and Demons met in the clash of the unbeaten teams on the Scott Street court in White Hills.

Pressure and skills were superb in a high-scoring contest which Elmore won 62-55.

Mount Pleasant is now on a three-game winning streak after the Blues surged clear in the final quarter at Huntly’s Strauch Reserve to score a 58-41 victory against the Hawks.

Blues’ coach Carine Comer was rapt with the team’s finish to the match.

After a tough start to the season, Mount Pleasant has climbed to the third rung on the ladder.

The Shellie Davies-coached North Bendigo marked its first win of the season.

The team in red, white and blue made the trek to Leitchville and scored a hard-fought 40-37 win against the Leitchville Bombers.

Colbinabbin and Heathcote fought out a great match at Heathcote’s Barrack Reserve.

The Grasshoppers led the Saints by two goals at the final whistle.

In this Saturday’s sixth round, North Bendigo and Huntly meet in the Golden City Cup match at Hibo Hotel Oval in North Bendigo’s Atkins Street.

Colbinabbin and Leitchville-Gunbower meet on the Grasshoppers’ turf at M.J. Morgan Oval.

Elmore is at home against Heathcote.

White Hills has the bye.