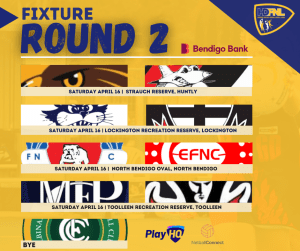 Bulldogs under pressure from Elmore Bloods

NORTH Bendigo returns to home turf for a crucial clash with Elmore on Easter Saturday in round two of the Bendigo Bank Heathcote District Football Netball League’s senior footy season.

The Bulldogs have a 1-1 record and will start favourite against the Bloods at Hibo Hotel Oval in Atkins Street.

Although it’s been a winless start to the season, Elmore has shown positive signs in matches at Colbinabbin and then at home against Mount Pleasant.

Both of the Bloods’ opponents on the first two weekends are rated as being strong contenders for the premiership.

The task for the Bloods does not become easier against a Bulldogs’ line-up determined to hit back from a 35-point loss and being held to just four goals in last Saturday’s match on Colbinabbin’s turf at M.J. Morgan Reserve.

Elmore’s defence will be up against the marking power of Dylan Klemm and Matt Gray.

It’s at ground level where North Bendigo coach Robert Bennett will be looking for his attack to show more bite, not in just in winning contests, but applying greater pressure.

De Napoli is a major danger to the North Bendigo defence, along with Friedberger and Gordon.

The Bloods will also to Matt Gilmour, Matt Nettleford, Kyle Armstrong and Sam McHale to continue with their great form.

Other players to watch in the red and white include Tannar Cerrone, Che Taranto, Darcy Laffy and Zack Holmberg.

Another big match will be at Toolleen where Mount Pleasant takes on White Hills.

The Darren Walsh and Adam Baird-coached Mounts showed they have plenty of midfield and attacking options in round one.

Ben Weightman and Adam Baird led the goalscoring on four and three goals.

Gun ruckman Chris Down is a huge recruiting coup for the Blues, along with Zane Keighran from Golden Square.

It was a tough first-up assignment for White Hills against Lockington Bamawm United.

There have been plenty of on-field changes for the Demons.

Bayden Fallon led the attack on three goals in the 63-132 loss to LBU.

Demons’ playing coach Jack Fallon will be urging the midfield and onball brigade to keep the pressure on the Blues all match.

The play of Rhys Irwin, Patrick Eefting, Gavin Bowles, Brady Childs, Mitch Dole, Kaiden Skelton and David Wright will be a key to chances of those in the red and black.

The Hawks are on the rebound from a 25-point loss to Heathcote at Barrack Reserve.

The play of Mitch Christensen, Tyler Miles, Jay McDonald and Connor Aldous was a highlight for the Hawks against the Saints.

The Tim Bannan-coached Leitchville Gunbower will be keen to perform well in its first hit-out of the ’22 campaign.

Assistant coach Ayden Walton will play a key role for the Bombers, as will reigning club champion and classy midfielder Tom Brereton.

The Brodie Collins-coached Cats will start favourite to continue their winning streak, but will be wary of a vastly-improved Saints line-up.

Across its opening two games, Heathcote has scored 30 goals.

Heathcote also has Liam Birch, Connor Hamilton and Jackson Jones who have shown a lot of skill in the forward 50m arc.

It’s at the other end of the ground where the Saints face a huge challenge.