FOOTBALL WRAP UP | Round 1 LVFNL 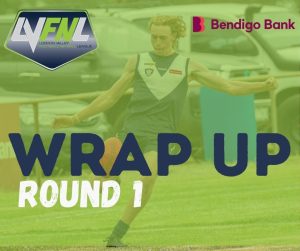 Greater accuracy in attack played a big part in the win by the Darrell Billett-coached Inglewood on the Demons turf at Calivil.

There were plenty of recruits in the Inglewood line-up.

Alex Lowe from Melbourne won plenty of the footy and the pressure and workrate by Bregon Cotchett was a highlight for the Blues.

Leading goalkickers for the Demons were Jake Lawry, three, and Phil Ryan, two.

The Bulldogs from Pyramid Hill showed plenty of fight in a tough win on Bridgewater’s ground.

In his first match as senior coach, Nathan Fitzpatrick was rapt with Pyramid Hill’s ability to keep the pressure up in the difficult conditions.

Bulldogs’ midfielder Ryley Dickens capped his first game for the club by being among the best, while Steve Gunther also starred in his return to the club.

With Marcus McKern in charge as coach, Mitiamo’s ruthless approach to the contest was again to the fore.

The Superoos led 36-13 at quarter-time of the clash with Bears Lagoon Serpentine and had gained a 47-point lead by the long break.

It was a tough initiation for Bears’ playing coach Justin Laird.

The Bears worked hard to set up attacks, but a return of 2.10 was disappointing against a team which scored 15.16.

Not only did the Mitiamo defence shut down the Bears attack, but also generated plenty of run and creativity off the half-back line.

James Bailey and Ryan Prendergast were best for the Bears.

The day’s play was completed under lights at Marist College Oval in Maiden Gully as the Maiden Gully YCW Eagles took on Marong.

The Linton Jacobs-coached Marong led 48-1 at quarter-time and by the long break held an 11-goal lead.

Others to impress for Marong were the athletic Richard Tibbett, Jimmy Gadsden and ruckman Sam Taylor.

The play of youngsters such as Ryley Taylor and Jack McCaig showed the Panthers will again be a serious challenger for the premiership flag.

Newbridge had the bye.

In next Saturday’s second round, Inglewood will chase consecutive victories when it takes on Maiden Gully YCW on the Blues’ turf at Inglewood.

Newbridge marks the start of a new campaign against Mitiamo at Holloway Air Riverside Oval in Newbridge.

Bears Lagoon Serpentine and Calivil United will be keen to bounce back from defeat when they meet at Gadsden Finance Serpentine Recreation Reserve.

Marong will be fired up for its challenge with Bridgewater in the Panthers’ den at Malone Park.

Pyramid Hill has the bye.