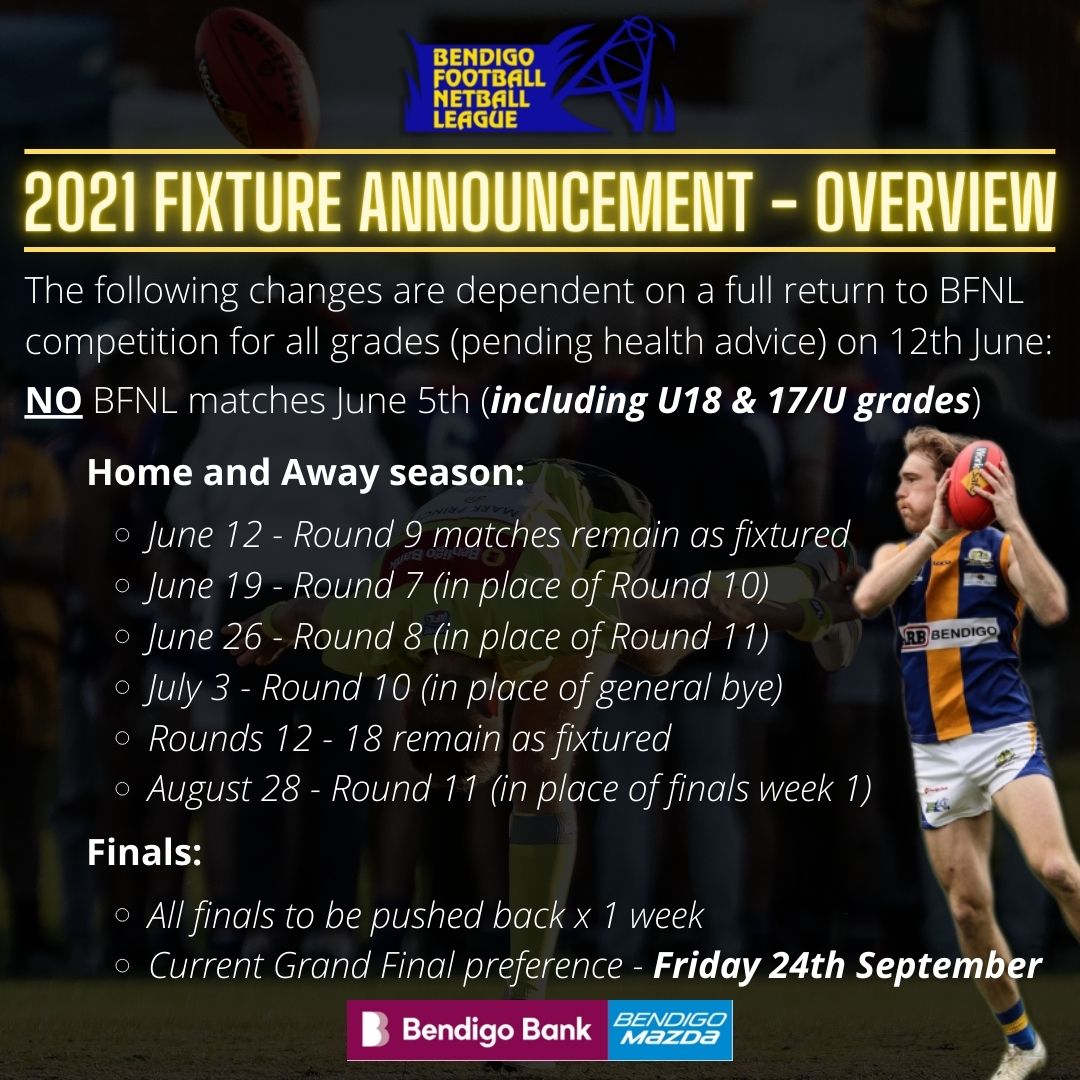 FRIDAY grand finals are the new goal for the Bendigo Bank Bendigo Football Netball League under a revamped fixture for the 2021 season brought about by the latest COVID lockdown.

The league has slated Friday, September 24 as its preferred option for grand finals at Queen Elizabeth Oval.

Pending health advice, the Bendigo FNL season will be rebooted on Saturday, June 12.

Key clashes on the Queen’s Birthday holiday weekend will be Sandhurst against Gisborne at Queen Elizabeth Oval, and Golden Square to take on Eaglehawk at Fur Life Vet Oval in Wade Street.

Strathfieldsaye will face Kyneton at Triple M Park in Tannery Lane, and Maryborough meets South Bendigo in the Magpies’ nest at Barkers Oval in Princes Park.

The winless run for Kangaroo Flat and Castlemaine would be broken when they meet on the Roos’ patch at Bendigo Mazda Oval in Dower Park.

Under the re-jigged draw, matches from round seven would be played on June 19 instead of the 10th round.

Games held over from round eight, listed for June 8, will now be contested on June 26 instead of round 11 games.

A general bye on July 3 will be replaced by matches listed in the 10th round.

The 11th round, originally listed for June 26, now moves to August 28.

Main games on that day are likely to be Sandhurst against Strathfieldsaye at the QEO; and Eaglehawk tackles South Bendigo at S & R Park in Canterbury Park.

All finals will be pushed back a week.

Qualifying finals and Elimination finals on September 4 and 5.

Second and First semi-finals on September 11 and 12.

July 3, round 10 instead of general bye:

August 28, round 11 instead of first week of finals:

A dual winner of the Ron Best Medal for leading goalkicker, Strathfieldsaye star Lachlan Sharp again leads the race for the award.

Next best in this season’s contest are Gisborne captain Pat McKenna, 23; South Bendigo’s Kaiden Antonowicz and Eaglehawk’s Darcy Richards on 20.