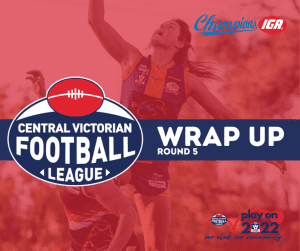 The clash between two of the league’s best was played under lights at Fur Life Oval in Golden Square’s Wade Street.

The home team led 9-0 at quarter-time and then added 2.1 to just three points in the second to hold a 19-point buffer in the third quarter.

Thunder struck back to keep Square scoreless in the third, but the margin was reduced by both teams.

Strathfieldsaye marked its first victory of the season after the long trek north on Sunday to play Kerang at Riverside Park.

Storm made a brilliant start and led 23-1 at quarter-time and 43-2 by the long break.

The Jake Donegan-coached Strathfieldsaye did not ease up the pressure or run as it scored 3.2 to nil in the third term and 3.4 to nil in the final quarter.

After just four matches in the league, Castlemaine has taken top spot on the ladder.

The Magpies soared to a 144-6 victory in Sunday’s match on North Bendigo’s ground at Hibo Hotel Oval in Atkins Street.

Castlemaine led 37-6 at quarter-time and then added 16.11 to nil across the next three quarters.

Goalkickers were not supplied.

Eaglehawk and Kyneton had the bye.

Round six kicks off this Saturday with the clash between Kyneton and Golden Square from 5.15pm at Kyneton Showgrounds.

Matches on Sunday start at 2.30pm and will be Kerang at home to North Bendigo at Riverside Park, and Thunder up against Eaglehawk at Weeroona Oval.

Castlemaine and Strathfieldsaye have the bye.