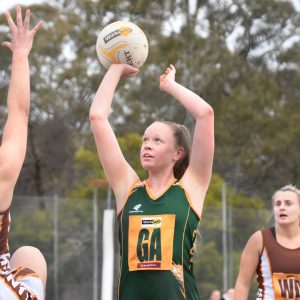 THE fight to decide fifth place on the A-grade netball ladder is far from done in the Bendigo Bank Heathcote District Football Netball League season.

Lockington Bamawm United, Leitchville-Gunbower and Huntly are all locked on 20 premiership points going into the 17th round.

Showdown of the round will be at Lockington where the fifth-placed Cats host the fourth-placed Colbinabbin.

Strong defence was a key when the Jessie Hardess-coached LBU claimed a 50-38 win at Colbinabbin’s M.J. Morgan Reserve in round eight.

Another win for the Cats against the Grasshoppers would strengthen LBU’s grip on the fifth rung.

Seventh on the ladder, Huntly takes on Elmore this Saturday.

The Hawks have home-court advantage at Strauch Reserve against the second-placed Bloods.

In round eight, Elmore beat the Hawks by 37 goals.

Leitchville-Gunbower faces the ladder-leading White Hills at Gunbower in round 17 action.

The Bombers were outplayed by Elmore last round and take on a Demons line-up which has a 13-1 record.

Rested by the bye, Mount Pleasant returns to the Toolleen court to take on North Bendigo.

It’s third against ninth, but the Blues will be wary after the Shellie Davies-coached Bulldogs scored a 42-37 victory when these clubs last met.

Heathcote has the bye.