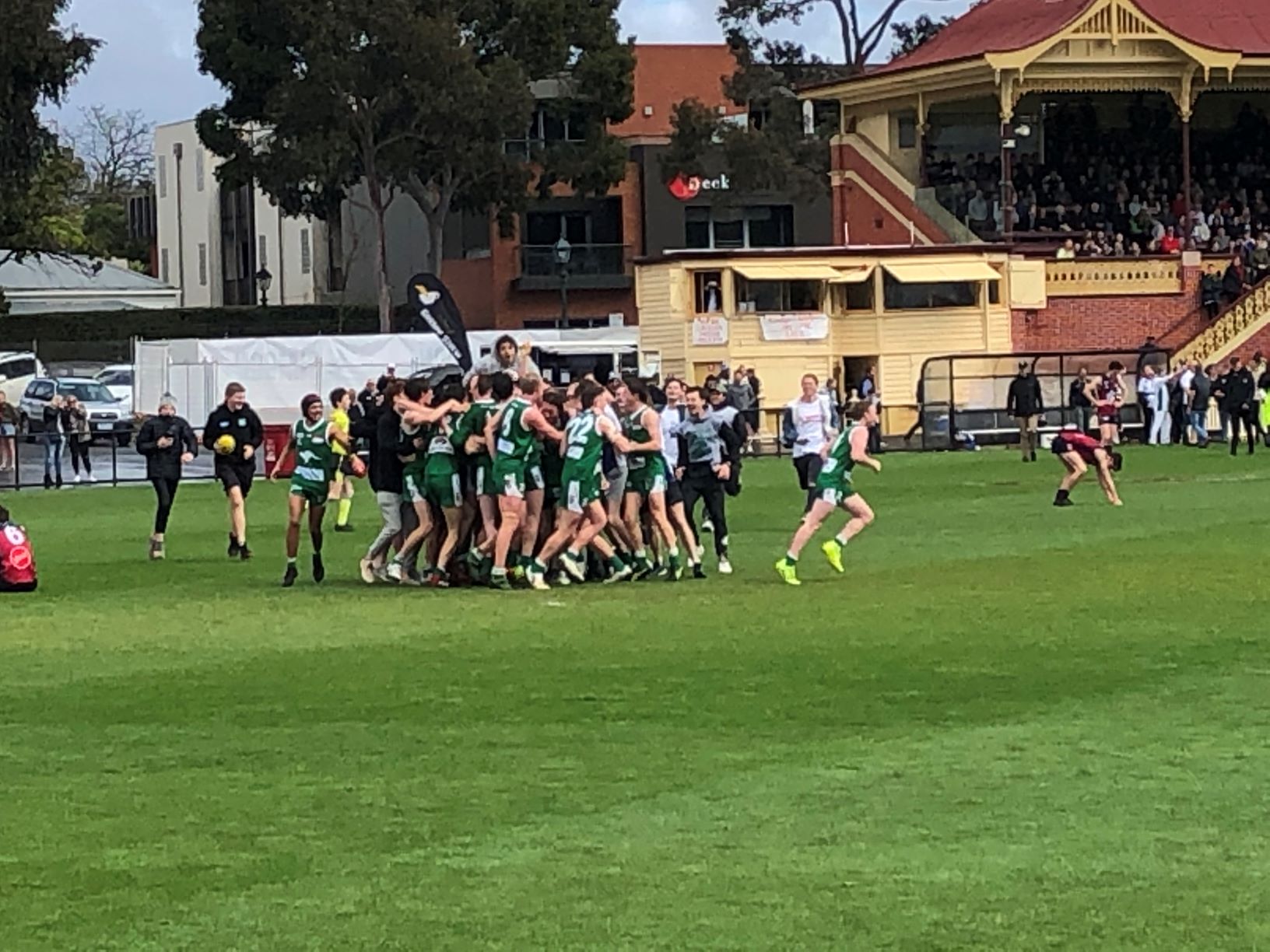 A 27-point win by the Kangaroos against Sandhurst at Queen Elizabeth Oval capped a 12-game winning streak by the Jason Stevens-coached team.

Hoisting the Sporstpower under-18s premiership cup was a first for the club, and the Roos’ first footy grand final win at any level since the seniors in 1996.

The Kangaroos made a flying start when Hakeem Johnson goaled inside the first minute.

The Dragons took the lead, 7-6, after a mark and goal by Zac Featherby.

From a win at a boundary throw-in on the grandstand wing, Kangaroo Flat surged into attack where the classy Mitchell Trewhella passed to Lachlan Wilson for a goal and a 13-7 lead in the ninth minute.

Five minutes later and the Roos were on target again through Lachlan Balcke’s set-shot which had been set up by a centred pass from captain Mitchell Rovers after he won possession the on the flank adjacent to the netball court.

Sandhurst had the breeze to the city end in the second term and did most of the attacking.

Noah Walsh roved a marking contest and coolly slotted a goal with a left-foot snap.

A mark and goal by Connor Sexton in the 14th minute put the Dragons within two points.

The desperation of the Kangaroo Flat team was shown by ruckman Max Johnson who contested a boundary throw-in on the grandstand wing and then chased and tackled an opponent.

That play did not result in a goal, but was inspirational.

Balcke was on the end of a Jack Hickman handpass and goaled on the run in the pocket for Flat to lead 30-22 at half-time.

The Kangaroos did most of the attacking in the early minutes of the third term, but the defensive effort of the David Gallagher-coached Sandhurst meant just one point was scored.

Ryan O’Keefe kicked Flat’s fifth goal after being freed in a contest.

Johnson then vied for goal of the day honours when he took the ball from a boundary throw-in and a right-foot snap sailed through.

A clever soccer kick from Harvey Gallagher in the goalsquare put the Dragons back within 16 points in the 16th minute.

After being in the hands of the doctor and trainers for a couple of minutes and possibly headed to the bench, Max Johnson played on and had a major impact on the game.

Lachlan Wilson showed the skill which earned the competition’s goalkicking award when he was on target from a tight angle in the pocket for the Roos to lead 52-30 at three quarter-time.

The Dragons faced a mighty challenge to overrun the rampant Roos.

Excellent teamwork by Riley Bouwmeester and Ryan O’Keefe to keep pushing the ball into the forward 50m was capped by a Wilson mark and goal for Flat to lead 58-30 in the fourth minute.

The classy Cooper Smith dodged a couple of oppoonents and was on target with a snap on his left to lift Dragons’ spirits in the sixth minute.

The dash and skill of Rovers was capped by one of the goals of the finals series.

In a one-on-one duel at half-forward, Rovers raced clear as he charged toward the South Bendigo FNC social rooms pocket and then curled the ball with his left foot for a brilliant goal.

After consecutive 50m penalties after a free kick at the centre ball-up, Cooper Smith goaled for the Dragons to trail 43-65 in the 15th minute.

Rovers ran into the goalsquare to cap great upfield work by Johnson and O’Keefe in the centre for Flat’s 10th and final goal.

An outstanding game by Johnson earned the Rod Ashman Medal, which honours Eaglehawk’s and Carlton’s brilliant rover of the 70s and early 80s.

Among the many stars for Kangaroo Flat were Rovers, Hakeem Johnson, Josh Leersen, Jade Mayes and Darcy McClure.

The premiership-winning team from Kangaroo Flat: