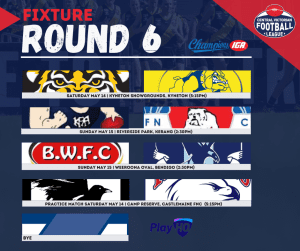 KERANG or North Bendigo will fight to break their winless run in Sunday’s completion to the sixth round of the Champions IGA-backed CVFL senior women’s footy season.

The Blues and Bulldogs will play on Kerang’s turf at Riverside Park from 2.30pm.

Both teams have battled for goals and to compete with the league’s best in the ’22 campaign.

It’s Community Umpiring Round across all leagues in the AFL Central Victoria, and AFLCV has also teamed up with the Pat Cronin Foundation to raise awareness about the “Coward Punch” and stopping all forms of violence.

On the football field, North Bendigo scored its first goal of the season when Kayla-Brea McIntosh was on target in last Sunday’s home game against Castlemaine at Hibo Hotel Oval in Atkins Street.

Best for the red, white and blue against the new ladder leader were McIntosh, Maddie Jelbart, Leonie Schulz and Teagan Stuchbery.

After it forfeited the Good Friday match to have been played on Kyneton’s turf, Kerang has played Bendigo Thunder, Castlemaine and Strathfieldsaye on the Blues’ ground at Riverside Park.

Round kicks off with Saturday’s twilight match between Kyneton and Golden Square from 5.15pm at Kyneton Showgrounds.

The Tigers will be keen to perform well before home fans under lights at Tigerland.

Kyneton has won its past two hit-outs against Strathfieldsaye, away, and North Bendigo, home.

Shannon Prendergast kicked six goals in the win against North Bendigo and will test Square’s defence.

Sarah Ingram, Andrea Wilson, Bree Heiden and Liz Watkins were best for the blue and gold.

A big match on Sunday will be Bendigo Thunder against Eaglehawk from 2.30pm at Weeroona Oval.

The Jac Louttit-coached Thunder will be on the rebound from its first defeat of the season.

In the lead-up to last weekend’s bye, Eaglehawk was beaten by Golden Square, 31-9, but had scored 100-plus point wins against Strathfieldsaye and North Bendigo.

Castlemaine and Strathfieldsaye have the bye.

This weekend marks another league first as Castlemaine and Mount Alexander Falcons will meet in a practice match from 5.15pm on Saturday under the lights at Castlemaine’s Camp Reserve.

Other upcoming hit-outs for the Falcons will be against Kerang on May 29 at Harcourt; and on Strathfieldsaye Storm’s turf at Triple M Park in Tannery Lane on June 5.

In exciting news to the competition, Mt Alexander FC will be playing Practice Matches this season in the CVFL Women’s competition.