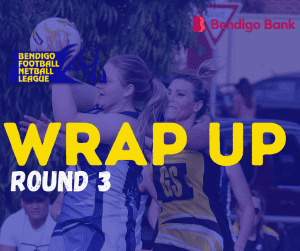 KYNETON and Maryborough marked their first A-grade netball wins of the season in Saturday’s third round of the Bendigo Bank Bendigo Football Netball League season.

After a tough start to the season which began on Castlemaine’s court and then at home against Gisborne, Kyneton marked the trek to Triple M Park in Tannery Lane to take on Strathfieldsaye.

The Tigers put in a superb effort to record a 40-30 victory.

Kyneton’s challenge now is keep the momentum rolling in next Saturday’s home game against a South Bendigo line-up on the rebound from defeat.

The Magpies and Bulldogs were desperate to chalk up win number one.

Stung by a 33-goal loss at home to Sandhurst in round one, Gisborne has struck back superbly.

The team in red, white and blue turned a two-goal lead at the last change into a nine-goal margin as it beat a skilful Castlemaine line-up, 43-34.

Despite being without Kelsey Meade in attack and Imogen Sexton in defence, Sandhurst was too strong for South Bendigo.

The clash of the QEO co-tenants was dominated by the team in maroon and blue.

Goalkeeper Ruby Turner was in superb touch and the Sandhurst goalers capitalised on the mid-court dominance on the way to a 59-30 victory.

The unbeaten Kangaroo Flat showed no mercy in an 80-22 victory against Eaglehawk on the Kangaroos’ court at Dower Park.

Eaglehawk and Golden Square do battle on the Canterbury Park court.