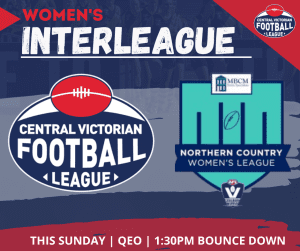 MANY of the best from the Champions IGA-backed CVFL senior women’s football competition will pit their skills against the MBCM Northern Country Women’s League in this Sunday’s inter-league match in Bendigo.

The Central Victorian line-up will be aiming to capitalise on home-ground advantage and playing in front of a big crowd at Queen Elizabeth Oval.

The showdown begins at 1.30pm at the Barnard Street venue.

Six of the eight clubs in the CVFL will have players on-field in the challenge.

There is plenty of goalkicking power.

Bendigo Thunder’s Britney Mueck has kicked 27 goals this season and will be a key target in the forward 50m arc.

A gun recruit for Castlemaine after Kangaroo Flat decided not to field a team in ’22, Shelby Knoll has kicked 26 goals for the Magpies.

The blue and gold won last year’s premiership with the husband and wife team of Rick and Carly Ladson as coaches.

Ladson and the CVFL selectors had more than 50 players nominated for selection try-outs.

The CVFL squad to play Northern Country on Sunday:

Meanwhile, Indigenous Round will be marked by AFLCV senior women’s teams across May 27 to 29.

Another night game will be played on Saturday, May 28 when Eaglehawk hosts Kyneton at Canterbury Park from 5.15pm.

The round will be completed on Sunday, May 29 when North Bendigo takes on Strathfieldsaye from 2.30pm at Hibo Hotel Oval in Atkins Street.

Bendigo Thunder and Kerang have the bye.