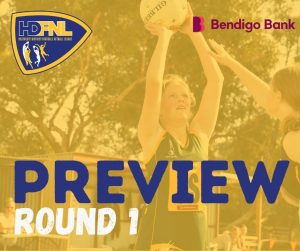 TOP two on the A-grade netball ladder when the 2021 campaign was called off, Elmore and Colbinabbin meet in this Saturday’s start to another Bendigo Bank-backed Heathcote DFNL season.

A new-look Colbinabbin will take to its court under lights at M.J. Morgan Oval against a powerful opponent.

Unbeaten last year, Elmore is rated as the team to beat for the premiership.

It’s a new-look coaching panel as Gabe Richards and Allira Holmes are joint coaches after a three-year rebuild led by Sue Borserio.

Premiership winning team-mates at Golden Square, Richards and Holmes will play key roles for the red and white.

A force on the netball court for more than a decade, Colbinabbin will be doing all it can to stay at or near the top.

The Grasshoppers’ coaching panel is led by Olivia McEvoy and Lisa Myers.

Colbo’s depth will be tested as premiership winners Lou Dupuy, coach in 2021, and goaler Jess Geary will not be in action for the green and gold.

A gun in the mid-court, Olivia McEvoy is likely to be on the sidelines for a lot of this season.

The Grasshoppers will also have Mardi Ryan in attack as well as being A-reserve coach.

A-grade grand finalists the past eight seasons, Colbinabbin will be doing everything it can to be on court in another season decider.

New coach Shellie Davies will be keen to mark her return to North Bendigo with a first-up victory.

A high for Davies was winning the Estelle Cheatley Medal as A-grade netball best and fairest when she played for North Bendigo in 2010.

A dozen years later and Davies will be keen to guide the red, white and blue to its first A-grade finals campaign since the 2016 season.

Although North Bendigo has home-court advantage, it will be easy task against Heathcote.

Last season, the Saints were just one rung below the sixth-placed North Bendigo.

Heathcote will be coached by mid-court ace Brooke Bolton and Kelsey Price.

The Heathcote DFNL’s A-grade best and fairest in 2021, Bolton will be keen for the Saints to mark early-season wins against North Bendigo, Huntly and Lockington Bamawm United.

As Bolton takes to the court for Saturday’s match, Kelsey Price will be on the sidelines.

A complete round of four matches will be played on April 9.