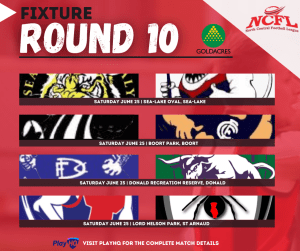 Donald has home-ground advantage for the showdown between first and second.

In round three, Donald scored an 81-64 win on the Bulls’ turf at George Cartwright Oval in Birchip.

The Royals and Bulls are in great form and on 8-1 records.

Donald’s only loss was at Sea Lake Nandaly in the seventh round.

A major strength of the Donald line-up is through midfield where it has Daniel Venditti, Ross Young and Rian McGough.

The Royals have Leigh and Will Burke and Ryley Barrack to lead the attack.

Birchip-Watchem will be determined to gain a psychological edge in the lead-up to the finals.

A strong Bulls’ attack is led by Will Sheahan, Daniel Castellano and Lachy Foott.

Boort will mark win number three or Charlton its first when the Magpies and Navies clash at Boort Park.

The round three showdown ended in a 79-77 win for Boort at Charlton.

It’s been a tough run for both teams.

The Magpies also welcome back Matt Chisari to the centre.

Ruck-rover Kade Blow and rover Aaron Walklate were best for the Navies.

Charlton will look to Bailey Kemp, Anthony Judd and Riely Thiesz to lead the attack and for Cobi Fitzpatrick, Jed and Rhys Thompson, Tim Hill and Daniel Thiesz to win plenty of contests.

Play at Lord Nelson Park in St Arnaud will be the Saints against Wedderburn.

In round three, Wedderburn beat St Arnaud by 93 points at Donaldson Park.

The Redbacks fought on for a 64-63 win as Joe Lockhart, Mitch McEwen and Luke Holt led the way in last Saturday’s clash at Wycheproof.

St Arnaud’s best in the round nine match at Donald included Bailey and Harley Durward, Matthew Goode and Jacob Tillig.

Sea Lake Nandaly Tigers are back at home to take on Wycheproof-Narraport.

It was a 101-point win for the Tigers at Wycheproof in round three.

The Demons will have a hard time breaking through a defence led by Cox, Adcock and Poulton.

The Demons will be keen to show they have improved a lot since they last met the Tigers.