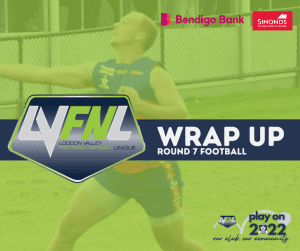 The Panthers raced to a 56-18 lead by quarter-time and almost hit the century in the first half as they led 98-36 at the main break.

Accuracy was a highlight for the Justin Laird-coached Bears who had six straight goals in the first half and then won the third term, 4.0 to 3.4.

The Linton Jacobs-coached Marong finished the match with plenty of run as it scored 8.5 to 2.1 in the last to complete a 173-73 victory.

Martyn kicked seven goals and Collins chipped in with six for the Rick Ladson-coached Machine.

Newbridge’s attack was led by Chris Dixon on five.

Mitiamo took the points, but was under the pump in a brilliant final quarter burst by Maiden Gully YCW at Marist College.

The Marcus McKern-coached Superoos le3d 35-23 at half-time and looked to have put the result beyond doubt when they scored 7.2 to 1.3 in the third quarter.

Despite the margin, Maiden Gully YCW did not give up and slammed on 7.2 to 1.2 in the final term.

The Superoos’ attack was led by Doug Thomas on four goals.

Since a 195-16 loss at Pyramid Hill in round five, the Wayne Mitrovic-coached Eagles have struck back to win at Calivil and be within 11-points of the third-placed Superoos.

Pyramid Hill held Calivil United to a goal in the match on the Bulldogs’ ground at Mitchell Park.

Calivil United broke the deadlock in the final term through Jake Lawry.

It was a tough afternoon for the Jack Daley-coached Calivil United which two weeks ago triumphed at Bridgewater by 16 points, but since then being beaten by Maiden Gully YCW and a rampant Pyramid Hill.

The list of Pyrmaid Hill’s goalkickers was not supplied.

Inglewood had the bye.

Goals from Inglewood’s win at Calivil in round one, and Pyramid Hill’s round seven win against Calivil United to be added.

In next Saturday’s eighth round, Calivil United takes on Marong at Calivil.