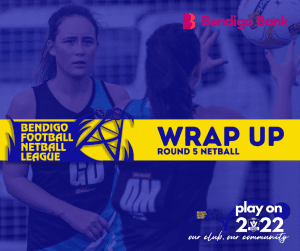 A BRILLIANT opening quarter put Maryborough in control of the A-grade netball match against Eaglehawk in Saturday’s fifth round of the Bendigo Bank Bendigo Football Netball League season.

The Magpies led 17-5 at quarter-time of the contest on the Princes Park court and then surged to a 17-goal buffer by the long break.

The Alicia Cassidy-coached Maryborough went on to claim its second win of the season, a great effort considering the club had just one victory in A-grade in ’21.

Among the Pies’ best were Keely Hare who was switched from her usual role in attack to play in defence.

The Magpies head to Strathfieldsaye for next Saturday’s match against Storm on the Triple M Park court in Tannery Lane.

It was a tough afternoon for Storm in round five as Gisborne scored a 70-37 victory at Strathfieldsaye.

At the QEO, South Bendigo won a great match against Castlemaine.

The Bloods led by margins of nine, six and four at the quarter-time breaks, but the Magpies kept the pressure on.

In the final term it was South Bendigo goalers Chloe Langley and Olivia Mason who capitalised on the work through the mid-court to win the final term, 23-12, and the match, 61-46.

Both teams were not at full-strength because of illness and injury.

Kangaroo Flat bounced back from defeat the previous round to win 65-4o against Kyneton on the Roos’ court at Dower Park.

In this Saturday’s start to the split sixth round, Castlemaine takes on Kangaroo Flat at Camp Reserve.

Gisborne and South Bendigo do battle at Gardiner Reserve.

Strathfieldsaye and Maryborough play on Storm’s court in Tannery Lane.

Eaglehawk and Sandhurst take a rest this Saturday ahead of the stand-alone match on May 19 at Queen Elizabeth Oval.

The match between the Dragons and Hawks will be part of the Pat Cronin Foundation’s work to stamp out violence across the state.