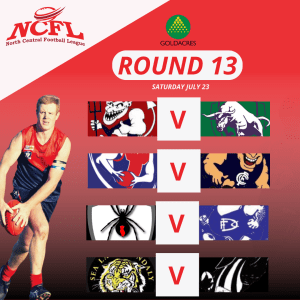 CHARLTON has a chance to mark a long-awaited victory when it plays on St Arnaud’s turf at Lord Nelson Park in Saturday’s 13th round of the Goldacres North Central Football League season.

It will be a tough ask for the Navies, but they almost upset the Saints in round six.

On that occasion St Arnaud won 67-54 at Charlton Park.

It’s Wedderburn against Donald at Donaldson Park in Wedderburn.

The fourth-placed Redbacks face a huge challenge against the third-placed Royals.

In round six, Donald scored a 68-point win on home turf against Wedderburn as Brody Haddow, Ryley Barrack, Sam Griffiths and Will Burke were best.

Wedderburn will look to Danny Benaim, Tom Campbell and Jordan Rosengren to finish off the attacks, and for strong games by ruckman Jordan Hargreaves, Hamish Winter-Irving and Jackson Guan in defence.

The Royals also have Ross Young in the centre, Rian McGough on a wing, and classy forward Seamus Young.

The Trevor Ryan-coached Bulls will start favourite to take the points.

In round six, Wycheproof Narraport turned up the heat in a 102-72 loss to the Bulls.

Best for the Boe Bish-coached Demons in that match were Gedd Hommelhoff, Jack McHutchison, Cody Green and Lachlan Van Schaik.

The Boort Magpies worked extremely hard to lead by 21 points at the start of the final quarter of last Saturday’s clash with Wedderburn, but were overrun.

The Andy Hawker-coached Magpies face a massive challenge in trying to limit the scoring chances set up by the Joel Donnan-coached Sea Lake Nandaly team.

In round six, Billy McInnes kicked eight goals for the Tigers at Boort Park.