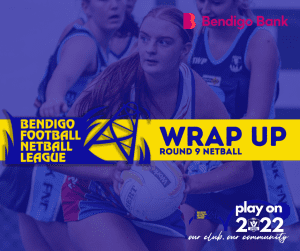 The Kangaroos took to their court at Dower Park without four of their regular A-grade line-up.

It did not faze the Jayden Cowling-coached Kangaroos on their way to a 30-goal win against the Bloods.

Among those to earn a call-up for the Flat was Ava Lowndes who marked her 100th game for the club by starring in defence.

The charge to a 74-44 victory was led by Ashley Ryan and Chelsea Sartori in mid-court as Lou Dupuy marked a game-high 53 goals.

It was second against fourth, but the final result showed the Jannelle Hobbs-coached South Bendigo there is plenty of work to be done to be a serious challenger to the league’s “big three” of Sandhurst, Kangaroo Flat and Gisborne.

A dual premiership-winning coach at Kangaroo Flat, Hobbs and her team endured a tough afternoon.

The Bloods went into the contest without Emily Cossar, Alicia McGlashan and Amy Morrissey.

Highs for the team in red and white were the play of Ella Flavell in mid-court, Sarah Nash, defender Stephanie Greene, and goalshooter Chloe Langley who scored 23 goals.

The unbeaten Sandhurst was too strong for Castlemaine at Queen Elizabeth Oval.

Highlight of next Saturday’s round 10 action will be the Sandhurst and Gisborne showdown at the Queen Elizabeth Oval court.

Eaglehawk and Strathfieldsaye meet on the Borough’s court at Canterbury Park.

It’s the Tigers against the Magpies as Kyneton plays Castlemaine at Kyneton Showgrounds.