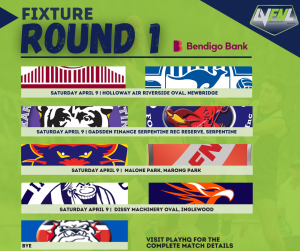 A NEW-LOOK Newbridge takes to the court at Holloway Air Riverside Oval in Newbridge for this Saturday’s second round of A-grade netball in the Bendigo Bank Loddon Valley Football Netball League season.

It will be a tough first-up assignment after a bye as Newbridge faces the in-form Mitiamo.

There a many new faces in the Selina Holland-coached Maroons team.

They join goalshooter Jorja Hufer and goalkeeper Sarah Lovell in a line-up determined to climb from last season’s seventh placing.

Players to watch for the Maroons include Hyett from Eaglehawk, and McCluskey from Mount Pleasant.

A dual winner of the Joy Lawry Medal as the league’s fairest and best in her time at Bridgewater, Kym Childs has joined the Maroons as playing coach of the B-grade team.

This year it will be Hicks and Carly Scholes who previously played at Bridgewater as the targets in the Superoos’ attack.

After another week on the sidelines because Inglewood is not fielding an A-grade team, Calivil United will be in action at Gadsden Finance Serpentine Reserve against Bears Lagoon Serpentine.

The Demons are being jointly coached by Karen Pascoe and Teigan Redwood.

The return of Hollie Alford is a huge plus, while Calivil United also welcomes Jasmine Condliffe from Rochester.

The Demons will be without the brilliant Christie Rogers this season.

Players to watch for the red and blue include Jarileey Scholtes in mid-court, Amy Ryan, goalshooter Tia Steen, and Michelle Balic.

It’s a tough run for Calivil United to open the season as it has the Easter break, a bye and then faces Mitiamo.

Bears Lagoon-Serpentine also faced a daunting task in its return to A-grade netball by playing on Mitiamo’s court.

The Bears worked hard, but Mitiamo was too strong.

The Stacee Burns-coached BLS will be determined to play well at home.

After an exciting 46-42 triumph on the Maiden Gully YCW Eagles’ court at Marist College, Marong is at home to face Bridgewater.

The Panthers and Mean Machine both started the season in style.

Marong coach Bianca Garton will again look for the Panthers to apply a lot of pressure through the mid-court and defence against a skilful Bridgewater at Malone Park.

The Aimee Brown-coached Bridgewater scored a 46-28 win against Pyramid Hill in round one.

Stung by a first-round defeat, the Christie Griffiths-coached Maiden Gully YCW team takes a rest on Saturday as Inglewood is not fielding an A-grade team.

The Blues and Eagles will contest all other grades at Inglewood Recreation Reserve.

Maiden Gully YCW will not play in an A-grade match until April 23 against Newbridge at Marist College Oval.

Pyramid Hill has the bye.