NETBALL WRAP UP | Round 2 BFNL 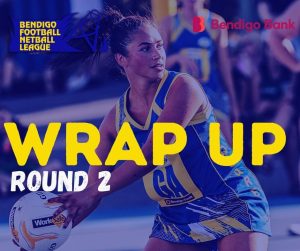 A dual premiership player with Sandhurst, Meade played at goalshooter and goal attack as Sandhurst took on Strathfieldsaye at Queen Elizabeth Oval.

The attacking flair and strong defence of the maroon and blue was to the fore in a 72-28 result.

In the showdown of the league’s Magpies it was Castlemaine which had Tara Ford, Jane O’Donohue and Caitlin Richardson play key roles.

The Alicia Cassidy-coached Maryborough worked hard to overcame a slow start in which the visitors gained a four-goal buffer by quarter-time.

The margin stayed at or near the mark for the rest of the contest.

Best players for Maryborough were Chrissy Hooper and Eliza Roughead.

The Jannelle Hobbs-coached Bloods led by eight goals at half-time and went on to record a 54-33 victory.

Chloe Langley led the winners’ attack on 41 goals as Emily Cossar also won plenty of the ball at wing attack.

Play on Good Friday was completed under the Kyneton Showgrounds lights where the Tigers took on Gisborne.

Stung by a 33-goal loss at home to Sandhurst in round one, Gisborne hit back to score a 65-31 win at Tigerland.

The Roos showed no mercy for their neighbours.

Because coach Jayden Cowling was in Adelaide representing Victoria at the national titles, Nicole Donnellon stepped up to coach the A-grade line-up.

An attack of Lou Dupuy and Abbey Ryan capitalised on the Kangaroos’ dominance through mid-court and excellent defence.

The hot form of Ingrid Hopkins in defence rolled on as Ashley Ryan and Chelsea Sartori were to the fore in many attacks on the way to an 88-19 victory.

The blue and gold went into this clash against one of the league’s best without captain Maddy Keighran and goalshooter Jane Reid.

A highlight of Anzac Round on Saturday will be the match between unbeaten QEO co-tenants South Bendigo and Sandhurst.

Another big contest will be at Gisborne’s Gardiner Reserve as the team in red, white and blue faces the in-form Castlemaine.